People will protest against refugees again

TWO PROTESTS against immigrants will be held in the beginning of September. 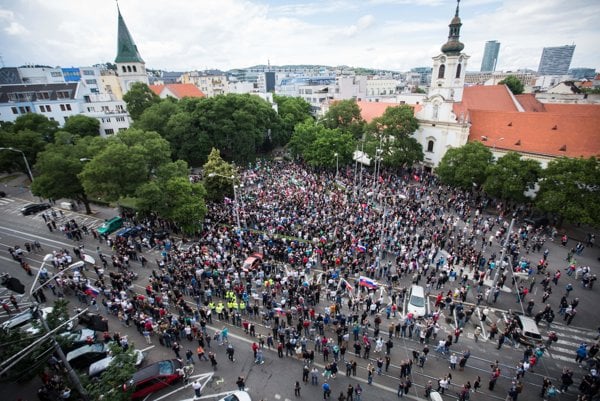 The far-right People’s Party – Our Slovakia, led by extremist and Banská Bystrica Regional Governor Marian Kotleba, will organise a demonstration in Gabčíkovo (Trnava Region) on September 1. They will protest against placing 500 asylum seekers from Austria at the local refugee camp, despite the refusal of the locals expressed at a local referendum held in early August.

“The more cars and motorbikes that will participate, the better,” reads the announcement, as quoted by the Sme daily.

Another protest should take place on September 12 in Bratislava. Originally, the seventh year of the night run event was to be held on the same day, but its organisers decided to postpone it to September 13 to prevent any potential clashes, the public-service broadcaster RTVS reported.

Though there were some incidents during the June protest against immigration in Bratislava and Interior Minister Kaliňák promised to make the rules for gathering stricter, no changes will impact the September demonstration.

He also considers the fact that Bratislava’s Old Town borough approved the protest and the run for the same day a failure.

“It is a sport event held in all of Bratislava, so all city boroughs should have clearly said that they have the event at the time, and it is not possible to organise any other gathering,” Kaliňák told RTVS.

On the other hand, the Old Town’s spokesperson Nora Gubková said that they found no relevant security reasons to ban the protest.

Elena Gallová Kriglerová from the Centre for Research of Ethnicity and Culture says that society should stop resisting the idea of accepting foreigners in Slovakia. Such protests do not solve anything and may result only in hatred and tension in society, she told Sme.