Craftsmen show their skills, for the 25th time

CRAFTSMEN skilled in all imaginable as well as unimaginable Slovak traditional crafts will gather from all over Slovakia to demonstrate their skills and sell products in Bratislava during the Craftsmen Days festival to be held during the first weekend of September. 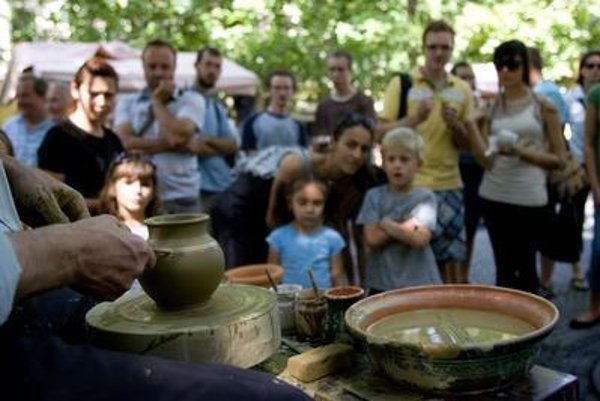 More than 100 folk craftsmen will attend including potters, blacksmiths, weavers, woodcarvers, tinkers and others who try to keep traditional crafts alive and show their skills under the slogan Let Crafts Sweep You Off Your Feet. Young designers will present their work too in order to demonstrate that the tradition can live on, even when using contemporary designs.

Traditionally, folk dance and music groups from around Slovakia will demonstrate their skills throughout the whole festival taking place on Hviezdoslavovo and Primaciálne squares.

Special emphasis is placed upon bobbin lace, when tens of bobbin lace makers from all over Slovakia will make laces which are famous around the world on the Primaciálne square on Saturday and Sunday. Additionally, Primate’s Palace will host an exhibition of contemporary creations by tinkers.

During the festival, those interested will be able to try and learn the skills from the masters within the School of Crafts held on Saturday and on Sunday.

Those hungry or with a sweet tooth can satisfy themselves at Rybné and Primaciálne squares where traditional Slovak meals will be sold.

The festival will culminate in the granting of the title of the master of folk craft, a title that ÚĽUV has been granting since 1959. This year it will, along with the Culture Ministry be awarded to as many as seven skilled masters.

For more about the festival taking place on September 5 and 6 go to www.uluv.sk/en.