ON THE WEEKEND of August 29-30, Slovak police discovered 60 foreigners mostly from Syria in suspicious vans near the city of Žilina – in northern Slovakia – and in Štúrovo in the south of the country. 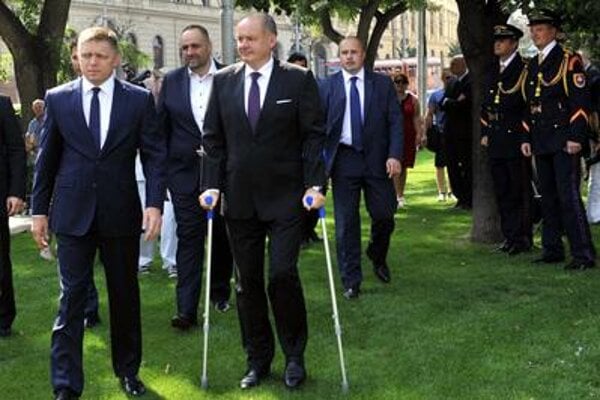 Moreover, two vans containing 26 refugees were stopped at the Čunovo border crossing near Bratislava on August 31, the Aktuality.sk website informed on that day. At least one of the cars has a Hungarian license plate.

On August 27, police detained a person who was attempting to smuggle two migrants to Germany, the TASR newswire learnt. A police patrol pulled over a suspect vehicle with German licence plates between Lozorno and Malacky, both in Bratislava region. The vehicle had driven into Slovakia from the Czech Republic.

Interior Minister Robert Kaliňák confirmed, as quoted by the Hospodárske noviny daily, that the latest detentions reflected just the increased activity and analysis, according to which routes of illegal migrants could be directed. According to him, the Slovak police are boosting and updating security measures. Slovakia, however, is only a transit country for most migrants. Head of the Slovak Migration Office Bernard Priecel stated that many say that they did not intend to come to Slovakia. Our country is rather a question of emergency for them, he added.

At the celebrations of the Slovak National Uprising on August 29, Prime Minister Robert Fico stated that the problem of migrants has to be solved first of all in countries where it has emerged. “European immigration policy has totally failed,” he stated, adding that despite promises the Schengen border remains unprotected. “Who is making fun of us? Smugglers and arms dealers,” he said, according to the Sme daily. Also efforts to welcome each refugee without distinguishing whether he needs real assistance, or whether he is only an economic speculator, are mistaken.

If the idea of introducing mandatory quotas for receiving immigrants in the EU re-emerges, Slovakia will reject it again, Fico announced. According to him, Slovakia is ready to assist in creating safety zones in the countries from where migrants come that will make it possible to identify economic wheeler-dealers, traffickers, arms dealers and people who really need help. The premier also noted that each country should have the right to choose whom it is able to care for. “We will repeat what we had said already at the European summit sessions – the situation must be tackled at the site where it had originated, and we should not focus only on the results,” Fico said, according to TASR, at the official SNP celebrations attended by 2,500 people, including diplomats and foreign visitors.

Slovakia should display solidarity in every aspect with refugees whose lives in their home countries are at stake, President Andrej Kiska said in reaction to Fico’s speech. Kiska added that the immigration issue is complicated. “I think that it has not demanded too much from our country,” he said, as quoted by the media. “We know that we are not the final destination... Our contribution towards Europe, the European Union, is to display solidarity with people whose lives are really at stake at home and who need help,” the president said after the SNP celebrations on August 29.