FIREFIGHTERS had a training at the exact place where dozens of extremists were heading to protest against placing 500 asylum seekers from Austria at the Gabčíkovo village refugee camp. That is the official reason why police with dogs and riot police stopped protesters a few kilometres from Gabčíkovo and avoided possible conflict with Hungarian extremists on September 1. 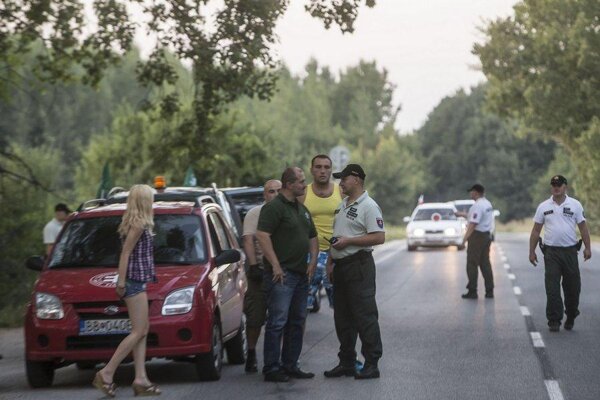 The far-right People’s Party – Our Slovakia (ĽSNS), led by extremist and Banská Bystrica Regional Governor Marian Kotleba, organised a demonstration in Gabčíkovo (Trnava Region) after the government did not respect the results of a recent referendum in which 97 percent of the local people who voted rejected the placement of migrants there. 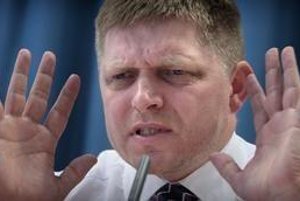 Such protests are frustrating because this is not a way in which public discussion about the migrant issue should be held, according to Bratislava magistrate MP Lucia Štasselová who is one of the founders of the Plea for Humanity initiative encouraging organisations and individuals to take part and help the migrants financially, materially, or as volunteers.

“The fact that public sentiment is led by such people is frustrating,” Štasselová told The Slovak Spectator. “The goals of this group of people are not about: Let’s discuss this issue. They don’t listen to arguments.” 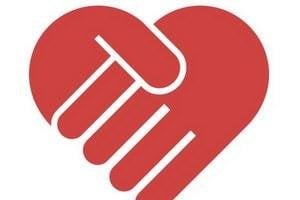 Protesters initially met in Trnava's main square at 15:00 where several representatives of ĽSNS had speeches. At times, it resembled a pre-election meeting rather than a protest against immigrants with speakers addressing issues like traditional family, nationalism and the social situation in Slovakia. They called on protesters to vote for ĽSNS in upcoming parliamentary elections.

Kotleba did not attend the meeting with ĽSNS representatives saying that instead he was called for a hearing at the Banská Bystrica city police station because on August 29, the state holiday marking the Slovak National Uprising, Kotleba hung two black flags on the regional authority building. 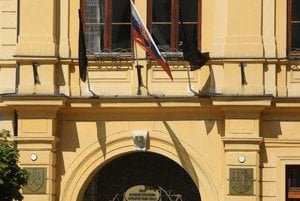 By rising up against the occupiers, Slovaks tried to show the world that most of the nation supported the Allies, unlike the official government of the country at the time.

It did not take long and Kotleba was released. However, he could not attend in Trnava because he was stopped several times by police patrols, according to ĽSNS representatives.

“There was police action related to the situation with immigrants, therefore people in Trnava region could see several police cars and some drivers were also stopped,” Trnava police spokesperson Martina Kredatusová told The Slovak Spectator after being asked if it was true.

Before the official program started, protesters in Trnava confronted a 24-years-old man named Jakub who was holding a cardboard sign reading: “I ashamed of you.” They tore up the cardboard and threw it in a garbage can. Jakub was also pushed out of the way but not physically attacked and police did not intervene. 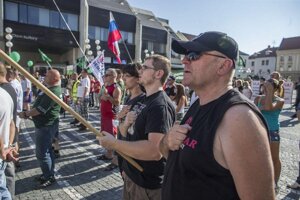 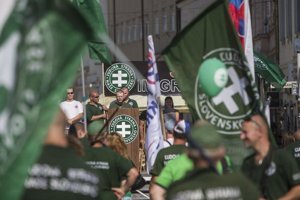 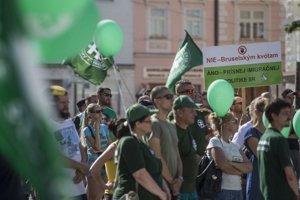 “I wanted to say that in this city there are also people with different views than these people have,” Jakub told The Slovak Spectator.

A few kilometres from Gabčíkovo drivers were stopped and turned away if they did not live in the Dunajská Streda district where Gabčíkovo village is also located. Protesters including Kotleba therefore rallied in front of the police officers who subsequently closed the whole road. 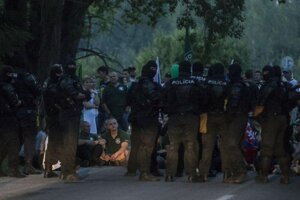 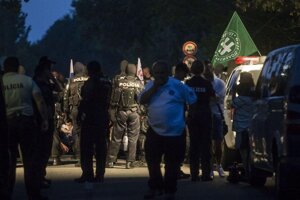 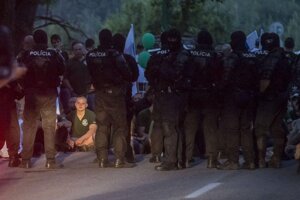 Meanwhile, around 200 hundred locals gathered in Gabčíkovo waiting for protesters. They were accompanied by approximately two dozen people from the Sixty-Four Counties Youth Movement, the far-right movement in Hungary advocating for the unification of all ethnic Hungarians that live outside of Hungary.

When Gabčíkovo Mayor Iván Fenes learned about the Sixty-Four Counties movement coming to the village he appealed to locals not to participate in theevent to avoid possible conflict with extremists from both groups.