THE EFFORT to present to the public the ruins of St Catherine of Alexandria’s Monastery, called familiarly Katarínka, led volunteers from the eponymous project to organise a cultural programme evening within the Night of Castles and Ruins. 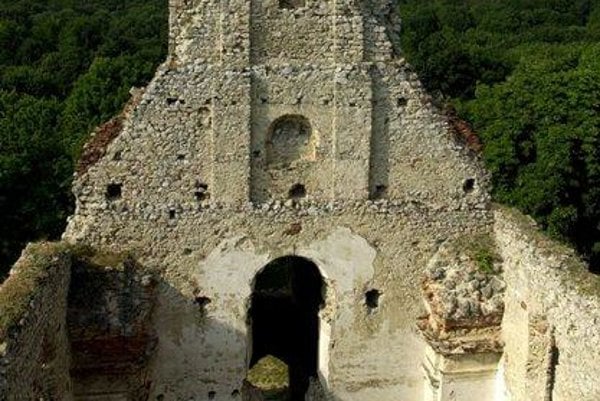 The third year of this event took place in mid August, and volunteers from the Katarínka civic association (OZ Katarínka) managed to organise a concert of works by Franciscan friars (Fr. Jozef Řehák – living between 1742 and 1815; and P. Gaudentius Dettelbach – 1739 to 1818) performed by vocal/instrumental ensemble Františkánska Schóla Bratislava. It is probable that the same music resounded at Katarínka 200 years ago.

Other events included a holy mass, and opening the crypt in the church’s nave for visitors, the TASR newswire wrote, citing organiser Ľubo Blišák. Finally, participants were guided by volunteers across the lighted ruins of the church and the monastery of St Catharine.

OZ Katarínka has been trying to save the complex, now in ruins, which lies between the villages of Dechtice and Naháč in Trnava region for about 20 years. Volunteers’ camps saw 1457 people try to use historical methods of renovation and historical materials. In the next tourist season, the finalising works should be done on the staircase and finishing touches should be done in the tower.  Volunteers, besides the hard work, discovered the history of this intriguing site lying amid nature.

OZ Katarínka is part of the Zachráňme hrady / Let’s save Castles hobby grouping that since 2002 associates 24 members from all over Slovakia, striving to save and protect castles, monasteries, churches and other historical sites, including ruins.

Other castles and historical buildings from all over Slovakia that participated in the event were the Kamenica, the Lietava, the Brekov, the Revište, the Blatnica and the Lednica castles.

The civic association informed on its website that more than 600 people attended the Night of Castles and Ruins at Katarínka, with the crypt being the biggest attraction; it was open for visitors for the first time since it was discovered in 2000. The mass in the church ruins also drew a crowd.