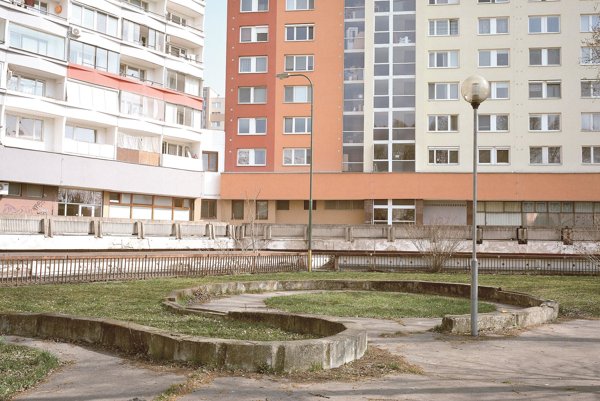 THE NAMES Auschwitz, Mauthausen and Treblinka immediately evoke images of emaciated prisoners behind barbed wire and the Nazi’s final solution. While these better-known places are far from Bratislava, Slovakia’s capital also once housed a concentration camp in Petržalka (Engerau in German). Maroš Borský and other researchers are bringing this dark chapter of Bratislava’s history into the light and their work is on display at the Jewish Community Museum through mid October.

“People often imagine that the events of the war took place far from here and do not realise that here, just behind the bridge, one of the darkest chapters took place on the territory of our country,” said Borský. “We want to show people this part of history.”

The Engerau camp in what is now Petržalka existed between December 1944 and March 1945, when it belonged to Austria and was annexed to Nazi Germany. Some 500 people perished from the inhuman conditions and the cruelty of the Austrian Nazis.

Nazi Germany deported to Engerau about 1,700-2,000 Hungarian Jewish men in the last months of the war. They were exposed to daily terror and murder at the hands of Nazi guards. Their official task was to build the so-called Southeast Wall that was to be part of a defensive system designed to resist the advancing Soviet Army. Many died from exhaustion.

A massive liquidation of prisoners took place less than one month before the end of the war. On March 30 guards murdered dozens and ordered the rest to walk 17 kilometres via Berg and Kittsee to Bad Deutsch-Altenburg. Estimates of the number of murdered prisoners varies from 60 to 250 men. The victims were buried in a mass grave in Petržalka. Around 1,500 prisoners set out on the journey. During the march an additional 90-95 prisoners were shot dead. From Bad Deutsch-Altenburg they were taken by ships to Mauthausen, where some of them walked to a sub-camp in Gunkirchen that the US Army liberated on May 4, 1945.

Immediately after the end of WWII 21 guards and other perpetrators from Engerau, mostly Austrian SA members and Nazi Party functionaries, were brought to justice. Twenty of them were sentenced during the so-called six Engerau trials held between 1945 and 1955. Of these, nine were sentenced to death, one to life in imprisonment and the rest received lighter sentences.

While a memorial at the Petržalka cemetery was unveiled shortly after the end of the war, the story of the Nazi camp has been nearly forgotten.

According to Borský, the Engerau trials are the basis of current knowledge about the Nazi camp. Claudia Kuretsidis-Haider, co-director of the Austrian Research Agency for Post-War Justice in Vienna and Graz, has been researching the Engerau trials for years. Kuretsidis-Haider, who also coordinates the annual memorial event at Petržalka cemetery, also participated in the project and preparation of the exhibition in Bratislava.

The exhibition Engerau – The Forgotten Story of Petržalka presents personal documents of the camp’s prisoners salvaged by Petržalka’s gravedigger Leopold Prepelica and now held by the Slovak National Archives.

“These documents are an exceptional and unique source of information about individual prisoners,” ethnologist Monika Vrzgulová, who carried out the scientific research of the documents, wrote in the exhibition catalogue. “Thanks to them, the nameless masses of victims have become real people with relationships, feelings, fates and life experiences. They help us to return identity and human form to the prisoners of the Nazi camp in Engerau who had previously been anonymous to us.”

Another part of the exhibition consists of photos of places where individual parts of the camp were situated. Contrary to other Nazi camps, the Engerau camp was not located in premises built for this purpose; rather it consisted of so-called sub-camps using existing buildings scattered around Petržalka.

Borský explained that one of the challenges of the project was to identify individual places where so-called sub-camps were located in the buildings that then existed. The biggest problem was that the old map of Petržalka, in which all streets were renamed after Nazi functionaries, was not preserved. Names of streets changed again after 1945. In the end, researchers in cooperation with the Slovak National Archives located the places of the sub-camps, which roughly correspond with the premises of of today’s Incheba or Leberfinger pub. He later invited Dutch photographer living in Slovakia Illah van Oijen to take pictures of these places as they look today.

“We believe that the story of the Nazi camp Engerau must not be forgotten,” Borský said.

What: Engerau: The Forgotten Story of Petržalka

Where: the Jewish Community Museum, Heydukova 11-13