The Slovak government however admitted it feels under enormous pressure from its foreign partners and that “there is a real threat that we will face the pressure of the member states that the migrants are heading to, on our own”. 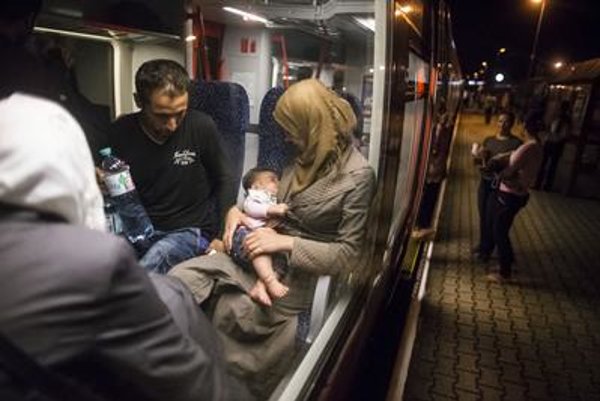 SAFE ZONES that would provide humanitarian aid to people fleeing their homes are a medium term solution to Europe’s migration crisis, argue Slovak officials as they prepare to coordinate policy with regional partners before an EU summit later this month.

Prime Minister Robert Fico’s government remains committed to the line that the migration crisis must be solved in the war-torn source countries. The negative stance towards resettlement quotas remains unchanged even amid the shift in the migration debate among the public following the discovery of a truck carrying 71 dead migrants on the Austrian highway near the Slovak border.

The tragedy touched Slovaks not only due to the geographic proximity, but as the dead included four children and the truck once belonged to the Slovak poultry producer Hyza Žilina. It still carried the brand of the company, even though its car plates were Hungarian.

Hyza is part of the Agrofert group owned by the Slovak-born billionaire, currently Czech Finance Minister Andrej Babiš. Hyza claims that it owned the car in the past but has since sold it.

The car had been parked on the side of the A4 highway between the Austrian municipalities Neusiedl am See and Parndorf since August 26. The Austrian highway administration employees who noticed the suspicious truck called the police who subsequently discovered the bodies in the back of the vehicle. The people most probably suffocated inside the closed truck, the Austrian officials said.

The tragedy, which attracted the attention of the global media and prompted the Austrian Interior Minister Johanna Mikl-Leitner to call this “a black day” for Austria, is the most serious migrant-related tragedy for Austria so far.

This event brought the migration crisis home to many Slovaks. At the turn of August and September, numerous individuals and groups organised through online social networks, collected material aid for refugees, mainly those stranded at railway stations in Budapest and those placed in the camp in Traiskirchen, Austria.

A group of citizens put together a Plea for Humanity, a document that was signed by more than 10,000 Slovaks as of September 2, including the country’s president, Andrej Kiska. The Plea authors call on the government to use its capacities to provide help to refugees in neighbouring countries.

The government, however, did not directly react to the Plea. The cabinet approved an updated stance towards the migration crisis on September 2, and assigned Fico to represent Slovakia at the September 4 summit of the Visegrad Group countries in Prague. In its stance, the government maintained its line that problems with refugees in Europe are a consequence and the solutions should be directed at the causes of the problem, back where the refugees come from.

Thus, the Slovak government proposes to build ‘safe zones’ for refugees in their countries of origin, where they could seek humanitarian aid.

The Slovak government in the document admitted it feels under enormous pressure from its foreign partners, the TASR newswire reported.

“Within the EU we are left with just a few allies and there is a real threat that we will face the pressure of the member states that the migrants are heading to, on our own,” the document reads.

The government in its official stance repeated its no to the system of compulsory quotas for redistribution of migrants, in line with the declaration of PM Fico following the August 31 session of the country’s Security Council that “Slovakia will not give in” and “will not accept criticism from certain political leaders from western Europe who do not like the approach of eastern European countries towards the migration issue”, the TASR newswire reported.

In its official stance, the government called for an open and complex discussion about migration and more robust common foreign and security policy, among other demanding a strengthened protection of land and sea borders of the union.

“As part of the immediate measures we are ready to receive refugees in line with the valid asylum procedures on a voluntary basis and take care of those whose lives are demonstrably and authentically threatened in their mother countries,” the cabinet stated as quoted by TASR.

The Slovak government focused on the protection of borders in its stance.

“We’re ready to cooperate at the level of the police corps when it comes to the protection of the internal Schengen area,” said Fico as quoted by TASR. “We want to press countries on the external Schengen border to carry out their duties properly and not open the borders to everybody.”

As things stand now, Schengen “has de facto fallen apart”, according to Foreign Minister Miroslav Lajčák who said that countries responsible for protecting the Schengen border let migrants pass through their territory freely.

“Under normal circumstances it is difficult to be granted the Schengen visa, while now tens of thousands of people walk around here without anyone checking on them,” Lajčák said as quoted by SITA. “So do we have Schengen or not?”

Securing the Schengen border is also one of the solutions that Slovakia is ready to pay for, as its financial contribution to the solving of the migration crisis. No concrete sums have been mentioned as of yet, however.

Following the tragedy on the Austrian highway, the Slovak police pledged they would cooperate with their Austrian and Hungarian counterparts, and seem to have intensified their activity against smugglers of migrants.

The police have been checking cars at border crossings to Austria and Hungary at the turn of August and September.

Over the last weekend of August, the police discovered 60 foreigners mostly from Syria in suspicious vans near the city of Žilina – in northern Slovakia – and in Štúrovo in the south of the country.

Moreover, two vans containing 26 refugees, including one child, of Iraqi and Syrian nationality, were stopped at the Čunovo border crossing to Hungary near Bratislava on August 31. They were being transported by two Serbian drivers in two vehicles.

On August 27, police detained a person who was attempting to smuggle two migrants to Germany, TASR reported. A police patrol pulled over a suspect vehicle with German licence plates between Lozorno and Malacky, both in Bratislava region. The vehicle had driven into Slovakia from the Czech Republic.

On September 2, a truck carrying 20 Syrian refugees was detained in Komarno, southern Slovakia. The driver, a UK citizen of Iraqi origin, attempted to escape.

Interior Minister Robert Kaliňák confirmed, as quoted by the Hospodárske noviny daily, that the latest detentions reflected the increased activity and analysis. Slovak police are boosting and updating security measures, he said.

Generally, Lajčák sees the main problem in the lack of a common stance on the matter in the EU, that lets each country deal with the migration issue on its own.

As The Slovak Spectator went to print on September 3, Fico was preparing to discuss migration with his V4 counterparts at an extraordinary summit convened in the Czech Republic, currently the presiding country of the V4, and later with the Czech Prime Minister Bohuslav Sobotka and Austrian Prime Minister Werner Faymann in Bratislava on September 7.