SINGING is the focus of this year’s Konvergencie chamber music festival, even if that might lie under the surface. 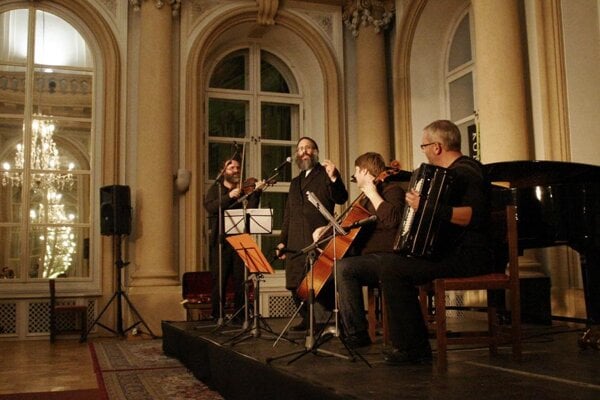 “Be it the singing of the alternative scene, the Chassidic songs, John Potter with Anna Mariau Friman who are top vocalists or world ranking in Baroque music who brought interesting projects exceeding the Baroque adaptation for two hands and two voices to music of Sting, Led Zeppelin and Peter Gabriel… singing is a leitmotif of the whole festival,” organiser Jozef Lupták said.

Taking place in Bratislava between September 10 and 20, the lineup also includes contemporary religious music performed in St Martin’s Cathedral from composers like Vladimír Godár, John Tavener and Arvo Pärt. Modern alternative singing will be represented also by Susanna Walumrod and her project, and Slovak band Ospalý pohyb, according to Lupták.

He told The Slovak Spectator that organisers used anniversaries of Slovaks they had cooperated with earlier, like composers Roman Berger, Martin Burlas (of Ospalý pohyb), the Moyzes Quartet, musicians Dano Salontay and Boris Lenko; while the concert in the Cathedral is dedicated to Arvo Pärt, who is celebrating his 80th birthday.

“The first concert [of the Slovak rock/indie band Longital playing their works with a string quartet, as arranged by Slavo Solovic] was originally meant to take place on the same day as the performance of Ospalý pohyb with Susanna Wallumrod, but it was possible for logistic reasons; and so now we have a sort of “alternative club scene” opening and closing the festival,” Lupták said.

Accordionist Boris Lenko, Norwegian songstress Wallumrod – who previously sung Baroque works, but also those of Leonard Cohen, Nick Drake and even AC/DC – this time with her own contemporary project; and also the Chassidic Songs are all back at the festival for a repeat performance. The last project returns to Konvergencie after seven years, although “we have been playing together on some other occasions”, Lupták, who participates, said.

Ten concerts in ten days offer all various forms and aspects of chamber music, from which virtually anyone can choose one according to his taste. The full programme can be found at http://konvergencie.sk/?page_id=104.

Moreover, Lupták delighted the fans of Konvergencie when he announced that in February, midway to the next festival on the calendar, there will be a weekend of Shostakovich’s music that is being prepared with the British Brodsky Quartet. It will offer 15 quartets of the Russian composer’s work in five concerts, preceded by a concert of  Shostakovich’s trio and a piano quintet.

“It will be really a condensed musical weekend,” Lupták said.