IN ADDITION to the widely-known advantages Slovakia can offer to new investors coming here, like a skilled labour force and a strategic location, Italians are also attracted by the growing number of Slovaks speaking Italian. 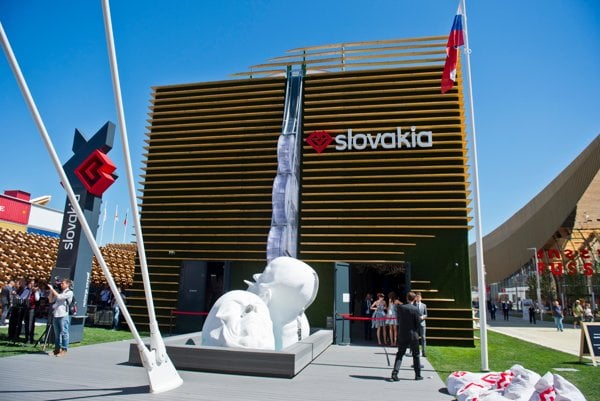 Slovakia’s pavilion at EXPO in Milan has been well received by Italians as well as other visitors. (Source: TASR)
Font size:A-|A+3

And even though some, even big firms, are leaving Slovakia, others are still coming and are interested in investments in various sectors.

“Economic bilateral relations between Slovakia and Italy are vital and very satisfying, especially if one considers that they have been growing over the last years, despite the global crisis,” Raffaele Calluso, the Deputy Head of Mission of Italian Embassy in Slovakia, told The Slovak Spectator.

Italy is the fourth biggest foreign investor in Slovakia, having invested about €42 billion between 1993 and 2012 according to Calluso.

Since its establishment in 2002, the Slovak Investment and Trade Development Agency (SARIO) has registered 24 successful projects implemented with Italian capital. These involved investments of more than €200 million and creation of more than 2,700 new jobs. These investments have been mostly in the automotive, machinery manufacturing and metallurgy sectors.

The latest data from the National Bank of Slovakia (NBS), the country’s central bank, on foreign direct investment (FDI) from Italy shows its strong position in Slovakia. In 2011 it was more than 8.5 percent of total FDI and one year later it rose to 9.6 percent.

“The preliminary NBS data on FDI to Slovakia for 2013 show that it is still an attractive destination for Italian investors,” SARIO spokesperson Richard Dírer told The Slovak Spectator.

SARIO is currently communicating with six Italian companies considering new facilities in Slovakia with the potential to create more than 330 jobs. One of the projects involves production of metal and plastic components, particularly for the automotive industry, Dírer said.

Italian language a plus

Italian investors are attracted primarily by highly-skilled workers, a well-developed infrastructure, a clear legal framework, Slovakia’s favourable location in central Europe, and its use of the euro. Another important factor is the high standard of living in Slovakia, Calluso explained.

“There is also another positive aspect to be considered: the growing availability of people speaking Italian, especially among Slovak young people,” he added. “This makes the life of Italian employers much easier, making a significant contribution for establishing a profitable and fruitful business environment.”

Other than several big companies, the majority of Italian businesses have established small or medium-sized enterprises in Slovakia.

“By representing the backbone of the Italian socio-economic fabric, Italian SMEs are considered a positive and inspiring model by many Slovaks,” Calluso said.

Arrival of SMEs, however, is influenced by a number of regulatory and administrative barriers.
“The regulatory framework in recent years has been unstable,” Giorgio Dovigi, general secretary of the Italian-Slovak Chamber of Commerce, told The Slovak Spectator.

In addition, SMEs have difficulties in gaining access to state aid programmes and EU funds.

“Other countries are managing these topics better and therefore are attracting more Italian companies,” Dovigi added.

Some leave, others come

Even with the positive development in mutual relations, some Italian companies have announced their decision to leave Slovakia. In late July, for example, the network of petrol stations owned by Agip were taken over by Slovnaft, part of the MOL group.

Also, the ENEL company announced in 2014 that it wants to sell its 66-percent stake in Slovenské Elektrárne, the country’s dominant electricity producer.

“The main reason for some Italian companies to leave Slovakia is connected with changes in market strategies and the fact that there are some neighbouring countries that are becoming more attractive for Italian investors,” Dovigi said.

The interest of Italian investors, however, is still high, especially in the retail sector or by companies that seek to de-localise small production, he added.

When attracting new investors, SARIO often cooperates with the Italian-Slovak Chamber of Commerce, which currently has more than 260 members.

The agency and the Slovak Foreign Affairs Ministry organised a Slovak-Italian Business Forum in Rome in June 2015 that focused on developing cooperation, mostly in the fields of energy, renewable energy sources, electro-mobility, pharmaceuticals, automotive components, electrotechnical sectors, IT, and water management, including transport, and anti-flood prevention, Dírer said.

Another important event will be held in September at EXPO Milan under the auspices of SARIO and the Slovak Economy Ministry, he added.

Calluso also pointed to the July visit of Italian Foreign Minister Paolo Gentiloni in Bratislava, at which potential cooperation was outlined in areas such as start-ups and the IT defence sector.

Cooperation can also be strengthened in the automotive, chemical, textile and wood industries as well as in finance and banking services. The two countries can also collaborate in constructing roads, environmental protection, agriculture, and also tourism, Dírer said.

Slovakia’s strategic location can also boost cooperation in logistics. “We expect that investing Italian capital into logistics may positively impact the decisions of other Italian investors from other fields to come to Slovakia,” Dírer added.