THE PRIME ministerial summit of Slovakia’s Robert Fico, the Czech Republic’s Bohuslav Sobotka and Austrian Chancellor Werner Faymann in Bratislava on September 7 did not result in any breakthrough in the diverging views on the introduction of immigration quotas as held by Slovakia and the Czech Republic on one side and Austria on the other. 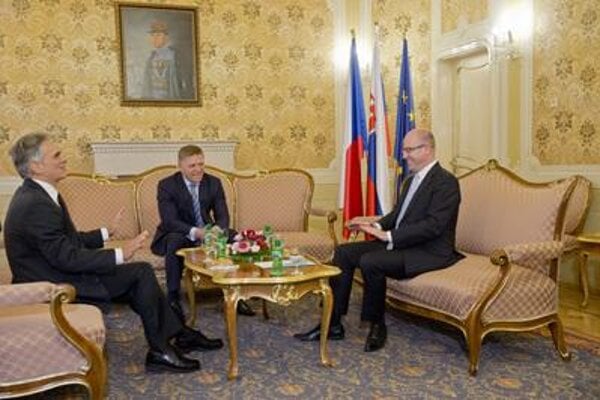 “[The quotas] are irrational,” said Fico as cited by the TASR newswire, adding that immigrants do not want to remain in Slovakia anyway, and the country does not have any instruments to keep them here.

Nevertheless, all three officials concurred on the need to improve the protection of the outer Schengen borders.

The Slovak prime minister added that if Greece, Italy and Hungary need help in this, Slovakia is ready to contribute in financial, material and personnel terms.

The officials further debated the creation of safety zones in European countries facing the strongest influx of immigrants to allow to distinguish between those who are escaping war and economic immigrants. Slovakia is also ready to contribute in this regard, but everything will depend on an agreement with the rest of the EU countries, said Fico.

PM Fico reiterated that Slovakia wants to display solidarity with those whose lives and health are at risk. Nevertheless, there is also a security dimension to the problem, he stressed, noting that the mass of people coming to Europe – demonstrably – also includes figures from Islamic State.