Hungary puts the misery back in migration

Chaos and despair mount at refugee camps near Serbia as Budapest throttles unprecedented movement of people across EU. 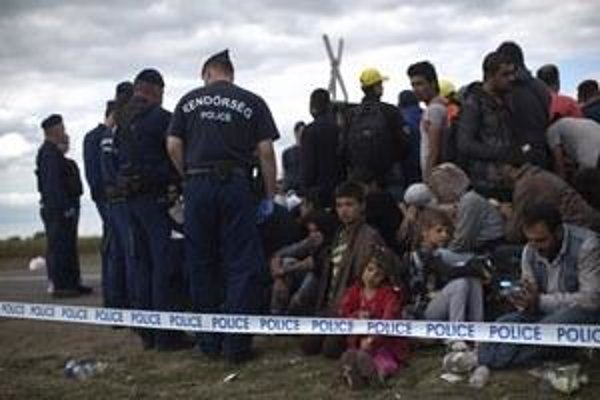 The southbound lanes of Hungary’s main M5 freeway connecting Budapest with the Serbian border were eerily empty last night. Empty, except for a ghostly convoy of several hundred refugees marching north lighted by the red-and-blue strobe of police lights, and accompanied by empty police buses they had refused to board.

A few hours earlier, the refugees had simply walked out of a makeshift detention centre near the border town of Röszke, where they had been risibly confined by police tape in the corner of a field. A baby wailed inconsolably in a Red Cross shelter. A few dozen small camping tents, provided by volunteers, stood among piles of refuse, and food was being distributed at random as it was brought in by private citizens. But of state aid there was no sign, except for the ranks of sullen police neither directing traffic, nor providing information. 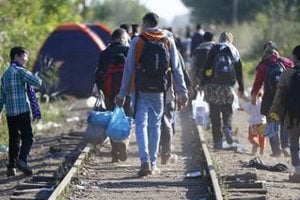 “I’m looking for my nephew,” said Mohammed Assad, 35, a Syria native who has lived in Belgium for 13 years. His sister’s son, 16, had last been in contact with his family six days ago on his way through Serbia, but since then had fallen silent. Assad scanned the milling crowd in desperation, his two-year-old son in his arms. “(Hungarian PM Viktor) Orbán is a dictator,” he said. “No Syrian would want to stay here. So why don’t they just let them go to Germany?”

Further down the road, two kilometres from the border with Serbia at Röszke’s main immigrant camp, scenes of deepening chaos. Hundreds of refugees stood or sat in the dirt around a razor-wire topped encampment as the evening temperature dipped to 13 degrees Celsius. The only food, water, or shelter to be had was being handed out by volunteers who had transported it from the Keleti train station in Budapest as surplus to needs there.

But while Keleti, only 170 kilometers north, had been tranquil on Monday afternoon – with only 200 refugees, some charging phones from electricity outlets or playing football beside piles of donated supplies – Röszke was raw and chaotic. Each bag of food or drink that one of the half-dozen volunteers walked through police lines was torn apart, almost apologetically, by older children and young men. The mini-riots the supplies caused drew angry warnings from the police guards, all of whom wore white hygienic masks. “Take it further inside, don’t give to them here,” barked one. After 30 minutes, the distribution of further aid was forbidden.

“You are doing the wrong thing,” an older refugee told a volunteer. “If there was no food or water for us, they would have to let us go. By bringing these things you make it possible for them to keep us here.”

In Szeged, a larger town 15 km north of Röszke, activist Tamas Szüts, 44, prepared 20kg bags of apples for distribution at the camps. He said his start-up NGO MigSzol (Migrant Solutions) had grown over the summer from an amateur project of five friends to an important aid operation with a building donated by Szeged’s mayor, and 150 active members giving their time daily.

“It’s just chaos here,” he said, juggling phone calls and questions from refugees stranded at Szeged’s train station. “The police obviously aren’t able to handle the job, the state isn’t providing any food or shelter, and this is just encouraging the refugees to defy them and keep marching.

“This is what happens when you don’t have a humanitarian plan.”

Almost 170 thousand refugees have entered Hungary this year, most of them through the Röszke crossing. That's almost half of Europe's record influx of migrants for 2015, which has exposed deep divides within the EU over core values and who should pay for housing the newcomers.

PM Viktor Orbán has tried to stem the tide, laying razor-wire and building an unfinished wall on the border with Serbia, and criticising Germany for generous refugee policies that he believes are fuelling the unprecedented movement of people fleeing conflict in the Middle East, Africa and elsewhere. On Monday, the Hungarian parliament voted to make crossing the border illegally a crime as of September 15.

On the ground, the situation changes daily. As recently as Sunday (September 6) evening, Slovak, Austrian and Hungarian volunteers were scooping refugees from points in Hungary and ferrying them to the border with Austria, where trains provided free rides further into Europe despite their lack of documentation.

Habibi, 21, from Kunduz in northeast Afghanistan, accepted a ride at Györtrain station along with five cousins and younger brothers. He said they had been on the road for two years – first by bus to Iran, then largely on foot to Turkey, where they had had to work for over a year to afford the $2,000 – per person – fee charged by people smugglers for a boat-ride to Greece. “It was terrible, all of it,” he said. “There were times we walked 26, 27 hours straight before we fell down to sleep.”

At Hegyeshalom station, Habibi and his young relatives scrambled onto a train for Vienna with five minutes to spare. Their expressions were a mix of exhaustion and elation: by the following morning, they expected to be in Frankfurt, their destination since leaving home. They accepted the offer of bananas, but with Austrian Red Cross workers handing out food and drink, no further aid was needed. “It has been good since Budapest, there has been lots of help,” Habibi said as his brother changed into a pair of donated sweatpants.

Hours later, Austria announced it would be closing its border to refugees without proper documents. Hungary, too, stopped busing refugees towards Austria and required newcomers to register with police and enter camps.

In Röszke, as the sun went down on Monday, volunteers arranged their cars to illuminate the informal field camp. But their headlights fell on little besides discarded clothing, food wrappers and drinks containers. Of the hundreds of disgruntled refugees lodged there only hours before, only several dozen remained.