AS PART of efforts to generate more renewable energy there are plans to build hundreds of small hydropower plants in Slovakia. While the idea of green energy is perceived positively by citizens, many of the projects themselves are drawing opposition -- including one on the Malý Dunaj (Small Danube) river near Eliášovce. 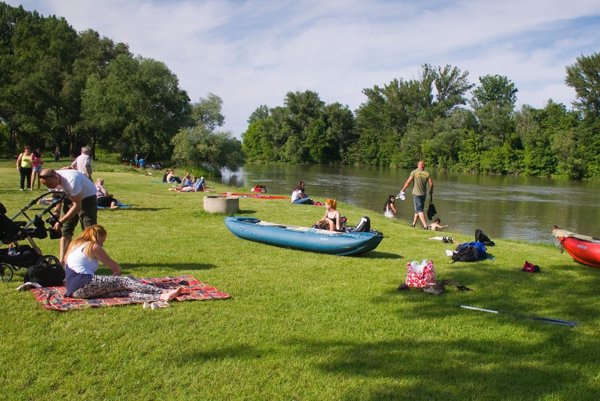 Locals and environmental activists have launched a petition and there was a recent protest sail down the river in early September. The investor, a private company, refutes the objections and claims that the project will not have an impact on the nature.

Prvá Produkčná has been planning to build a small hydropower station near the Eliášovce village to harness waters of Malý Dunaj to generate electricity. Investments are projected at €3 million while the power plant would have one turbine with the installed capacity of about 600 kW, the TASR newswire wrote.

The project, preliminarily approved by the regional office in Trnava in March, raised opposition when more than 50 groups including the mayors of affected villages, land owners, agriculture cooperatives, fishermen and local citizens submitted objections. They argue that the project has not been properly assessed from the viewpoint of its influence on the environment and that it violates EC directives. The case ended up at the Environment Ministry, which on September 4 returned the whole case to the Regional Office in Trnava and thus partly complied with the challenge of the activists.

“We have won time,” said Samuel Martiš from the petition committee told the Dennik N daily.

Activists claim the hydropower plant would not only have negative impacts on the environment but also local tourism.

“The Small Danube is one of last relatively preserved low-land rivers in Slovakia,” the petition reads, adding that construction of the power plant would cause cessation of conditions for life of protected species and destruction of precious floodplain forests and habitats on the banks of the river.”

The construction of the plant would also significantly curb the attractiveness of the Small Danube for water tourism and its potential for further development, they argue. The petition also questions the economic effectiveness as its installed capacity is projected at 0.6 MW.

“We are convinced that negative influences of the construction and operation of the small hydropower station highly exceed its declared benefit,” reads the petition.

Martin Paták of Prvá Produkčná does not share concerns that the local nature and environment would be endangered.

“The team of designers approved to the project so that the character of the country is preserved,” Paták told the Plus Jeden Deň weekly. The plan includes a passage for canoes as well as a fish ladder and it will not affect the national cultural monument of the wooden water mill in Jelka.

“By jumping into the river, we’re pointing to environmental problems of our rivers and the violation of European regulations on water,” said Martiš as cited by the TASR newswire. “We’d like to preserve one of the most beautiful Slovak low-plain rivers for future generations.”

Local fishermen and hunters have also spoken against the investment, claiming that it will have an adverse environmental impact and endanger a number of rare animal species. According to hunter Alexander Bӧgi, the energy significance of the power plant is questionable.

“This is a power plant set to produce approximately 5,000 megawatthours annually, which isn’t much,” said Bӧgi as cited by TASR. “It wouldn’t even suffice for one village. And when the government constantly declares that we have enough electricity and will be able even to export it in the wake of the completed Mochovce [nuclear power plant], then what’s the use of such a power plant? It’s just business for certain people.”

Pavol Littera from the Faculty of Natural Sciences at the Comenius University points out negative effects construction and operation of the hydropower plant would bring. During the construction, the level of ground water will rise and this could result in killing trees that provide shelter to animals. The hydropower plant will also slow down the flow of water while turning flowing water into streamless water would endanger fish, he said.

“In the river there lives even as much as 10 fish species of European importance that need flowing water,” Littera told the Denník N daily. “When the water stops [flowing] they will have no place to live.”

Local activists plan to continue with the campaign in the future by organising further events and collecting 10,000 signatures for a petition to be handed to the Environment Ministry, Trnava Region and the European Commission.

The local fishing association claims that as the lock goes through nearly the entire river bed, it will turn local flowing water into still water endangering local fish like grayling.

Pavel Švec from the local fishing association in Orlov said that they support environmental-friendly production of electricity, but they want a fish ladder and to replace the cement lock with a mechanical one.

“We want that environment-friendly energy is being generated … but now they are harming us and harm our property,” said Švec as cited by TASR, adding that the cement lock may also be a problem during floods.

On September 9 involved parties including representatives of the environmental protection of regional offices in Prešov and Stará Ľubovňa, the Slovak Fishing Association as well as the small hydropower station gathered in Čirč at a state water protecting supervision.

“Until the state water protecting supervision is not completed it is not possible to provide any closer information in terms of adopted measures,” said Ladislav Polák, the head of the environmental department at the regional office in Stará Ľubovňa as cited by TASR. “We have to wait for results of the supervision.”

During such supervision all related permissions, announcements of construction adjustments and stances of affected bodies are being scrutinised. Afterwards measures will be taken. Thus it is not clear whether the cement lock will have to be removed.

Polák concluded two weeks ago that the way of realisation of the construction is not in line with the project documentation for construction of the small hydropower station, the SITA newswire wrote.

While Milan Roba, owner of the small hydropower power station insists that he constructed the lock with all valid permissions the supervision on September 9 found out violation of the water law, TASR wrote.