Notice panels potentially enraging some locals to appear in Nitra

HOT issues of recent times, like the influx of refugees or the stance of the Slovak ‘majority’ towards Roma, will be tackled by a project which is part of the Divadelná Nitra 2015 theatre festival, the leitmotif of which is Empathy – Sharing and Giving. 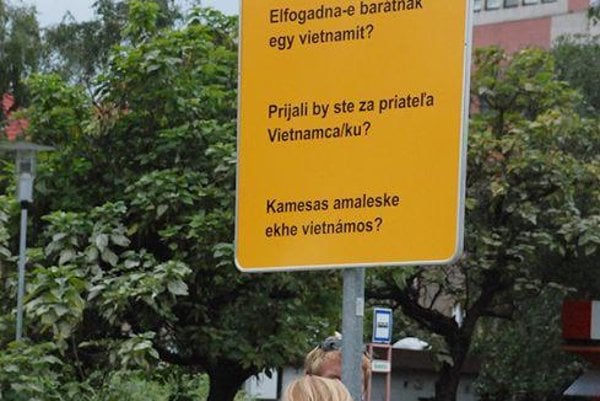 ‘To what extent are we able to accept other ethnic groups?’ is just one of the questions raised by visual artist Ilona Németh. Preceding, accompanying, and following the festival, notice panels with inscriptions in four languages will appear in the streets of Nitra between September 15 and October 15. They may provoke and enrage some inhabitants – like those who wished death to the 71 migrants who suffocated in a truck outside Slovak borders or those who refuse to serve Roma in pubs and restaurants.

The NR Public Art installation brings questions to the public space that are elements of the so-called Bogardus social distance scale – the scale measuring racism and other ethnic prejudices, created by Emory S. Bogardus in 1926.

“For her installation, Ilona Németh chose the form of panels resembling road signs to be installed on lamp posts,” Slavka Civáňová of the festival organizational team told the regional Sme Nitra newspaper. “Questions commonly used in this type of sociologic research are written on them in four languages: Slovak, Hungarian, Romani and Vietnamese. These are the languages of minorities living in Nitra and that of the majority; each question will be posed in each language,” Civáňová added.

The questions are meant to encourage passers-by to think about whether and to what extent they would be able to accept members of each ethnic group – accept them as spouse, relative, in-law, friend, neighbour, housemate, colleague, co-citizen, or tourist.

The project had been previously installed in Dunajská Streda and Nové Zámky in Slovakia as well as in Budapest where it was, however, cancelled within 24 hours - with the pretence there are no minority issues there. The project had experienced some problems from the local city-hall in Nitra (mostly the department of the main architect) but these were allegedly mere technical issues, not concerning the content. Németh has had a vivid response from all minorities mentioned in the questions, with Roma even protesting against the installation, but talks brought about a positive outcome for all involved.