US Convoy to enter Slovakia on September 14

ON THEIR way from Germany to an exercise in Hungary, a military convoy of about 640 US soldiers with around 150 pieces of equipment will travel through Slovakia. 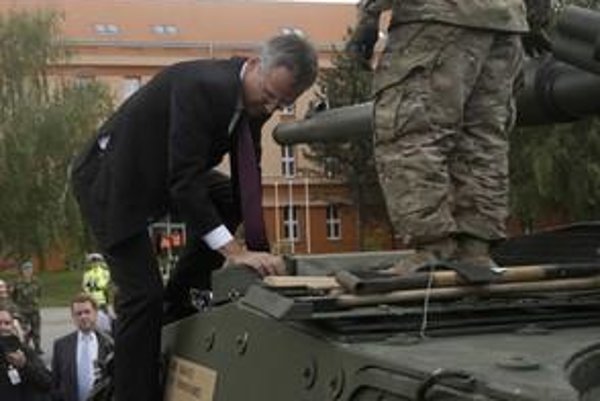 NATO Secretary General Jens Stoltenberg climbs down from a US army Stryker armoured vehicle when greeting parts of a US military convoy that stopped in Prague on their way to Hungary for the NATO Brave Warrior 2015 military exercise. (Source: TASR/AP)
Font size:A-|A+10

Among them will be eight-wheeled armoured Stryker combat vehicles which also took part in the so-called Dragoon Ride from Estonia to a military base in Germany in March. Slovaks seem to welcome them both with positive and negative responses.

The convoy will probably enter Slovakia on September 14 in the afternoon via the Lanžhot-Brodské border crossing in Trnava Region, between the Czech Republic and Slovakia. It will enter Hungary on September 17, Pavel Macko, Second Deputy of the Chief of General Staff of the Armed Forces, said at an earlier briefing.

American military equipment will be on display at a Defence Ministry Open Day on September 16. “These units won’t travel in a single convoy, the column might be comprised of multiple parts, as moving 150 pieces of equipment is a difficult task when regular traffic is on the roads,” Macko explained, as quoted by the TASR newswire. The vehicles will take the shortest route possible to Hungary, so they will probably travel on the motorway, but alternative routes have been prepared as well.

The American soldiers will stay in Slovakia for several nights and will be accommodated in Defence Ministry facilities. This will be along the way, either at the airbase in Kuchyňa or at the Turecký vrch training area (both in Bratislava Region). More than a hundred Slovak soldiers have been tasked with dealing with the convoy in terms of its movement and accommodation.

“This exercise will set the parameters for what it would mean if we needed to accommodate allies on a larger scale – how many of our soldiers would be needed to integrate those that come to help us,” said Macko, adding that it is also a unique opportunity for Slovak soldiers to take part in an exercise with their American counterparts. He rejected speculation that the US soldiers could pose a threat to Slovaks. “These are soldiers, they are preparing and training for their tasks, they are not carriers of any political messages,” he said.

An advance group of soldiers has already passed through Slovakia in order to plan and survey the convoy’s route in more detail.

The Central European Policy Institute (CEPI) and the Slovak Atlantic Commission (SAC) are preparing a public gathering at the Slovak border near the town of Brodské in order to greet the US military convoy travelling to an exercise in Hungary. By doing this, the organisations want to express the opinion that Slovakia’s NATO allies are welcome in the country.

The move comes in response to an announcement by Front ľavicovej mládeže (Leftist Youth Front) at a protest in Bratislava on September 10 that it plans to block the convoy. The Front has also declared its intentions on social media.

Michal Číž from SAC estimates that around 100 people could participate in the welcoming party. According to him, the convoy is no reason to look for a sensation or to make claims concerning an inappropriate demonstration of NATO’s power.

Exercises like this will increase Slovakia’s security, Jaroslav Naď from CEPI opined for TASR.