Concert of solidarity and protest against islamisation coincided in Bratislava

TWO events with antagonistic goals coincided in Bratislava on September 12: a concert meant to show the openness of Slovakia’s capital towards refugees and migrants; and a protest against the Islamisation of Europe. 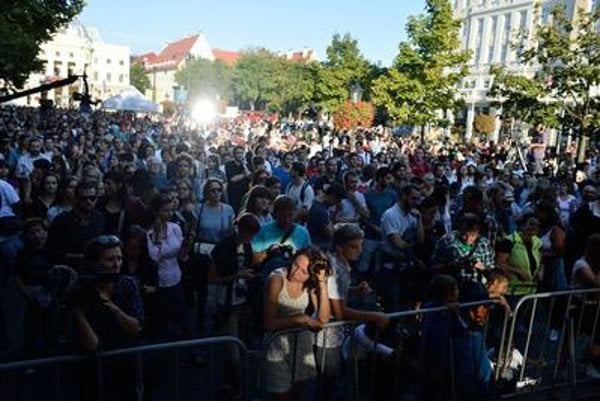 The concert Plea for Humanity: LIVE was attended by about a thousand people, the Sme daily wrote. Aside from a number of bands that performed at the benefit concert, the event received support also from public ombudswoman Jana Dubovcová and several politicians, e.g. Bratislava Mayor Ivo Nesrovnal, as well as famous personalities (like actor Juraj Kemka). 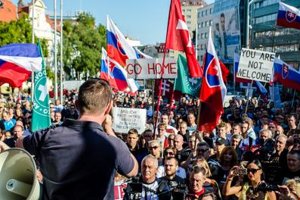 Read also:Go home, and other notes from the sewer Read more

“Bratislava has always been a cosmopolitan city, where all ethnic groups live together,” Open Society Foundation director and event co-organiser Ján Orlovský said, as quoted by the TASR newswire. “Seeing as protest marches tilted towards hatred – against Islam and foreign elements – are happening today in 65 cities of Europe, we have told ourselves that we cannot let intolerant people occupy the public space. This is an opportunity to show in a non-violent manner that coexistence is possible with anyone, provided that the individual in question behaves in a similar fashion.”

A number of bands and artists accepted the invitation to perform at the concert, including Bez Ladu a Skladu, Korben Dallas, Živé Kvety and Para. The Plea for Humanity initiative has already received support from more than 11,000 people, including President Andrej Kiska. The initiative was conceived in the wake of a recent tragedy, when 71 dead migrants were found in a van in Austria close to the Slovak border.

Refugees are undoubtedly in need of charitable acts and I hope people will join forces in their effort to alleviate their suffering because they're our brothers and sisters, reads a letter from the Dalai Lama addressed to this benefit concert in support of aid for migrants. “… Since each of the seven billion people on this planet is equal in his or her desire for happiness, I call upon the international community to focus on unity and closeness of the human family when seeking solutions. It follows that we need to shoulder a portion of collective responsibility and help address the root of the problems that led to the current situation and which, paradoxically, was caused by us, people,” the Dalai Lama wrote, according to TASR. 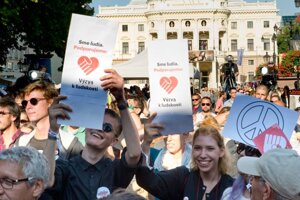 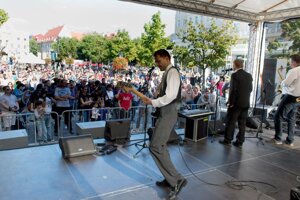 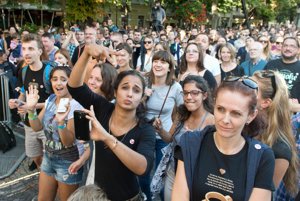 Concert of solidarity and protest against islamisation (6 photos)

On the other hand, participants of the anti-Islamisation protest gathered at the Bratislava main train station in the afternoon and subsequently marched to SNP Square, where the event organisers delivered speeches. The crowd swelled to approximately 1,000 people but no violence was reported. The protestors walked through Štefánikova Street and Hodžovo Square during their march, and both areas had to be cordoned off by police. Additionally riot police and a helicopter were despatched to ensure public order.

During the march, the crowd chanted slogans such as “Slovakia for Slovaks” and “We’re at home here!”. The participants held placards reading “We won’t give up our homeland, we’ll defend it” and urged passers-by to join them, TASR wrote. In their speeches, the event organisers called on people to reject the EU migration policies, multiculturalism and Islamisation of Europe.

The demonstration against Islamisation continued in the late evening hours in Malacky, a town in Bratislava Region. Shortly after 18:00, police patrols apprehended three people on Továrenská Street who failed to identify themselves. “No use of force was necessary on the part of intervening police officers,” Szeiff added.

In Bratislava, police reported no violations of public order with respect to these events on Saturday, September 12, TASR was told by Bratislava Regional Police spokesman Michal Szeiff  – unlike an earlier protest that expanded into violence and riots against passers-by and an international bicycle race that had to be scrapped.