US convoy arrives in Slovakia

DEFENCE Minister Martin Glváč and Chargé d’Affaires of the US Embassy in Slovakia Rudolf V. Perina welcomed the US military convoy which arrived in Slovakia on September 14. 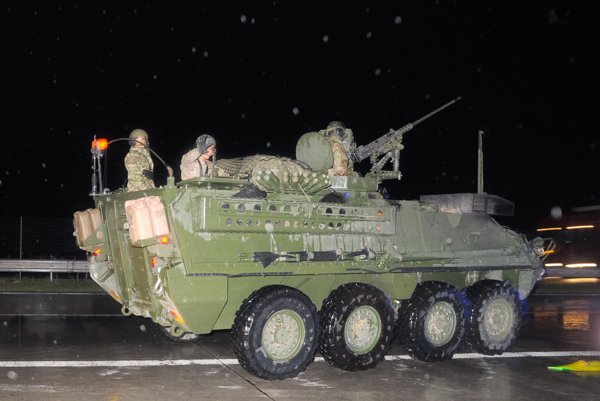 Besides them, the convoy was also greeted by protesters who came to the Czech border.

“Now we are training the move on roads and in future we will probably attempt to move on railways or in the air,” Glváč said, as quoted by the SITA newswire, adding they want to train using various types of logistics.

The military exercise and transport of military technology through Slovakia is an opportunity to test the abilities of the Slovak army, Glváč continued.

Perina said that Slovakia and the US are partners and as allies they cooperate on various levels.

Chief of the General Staff of the Slovak Armed Forces Milan Maxim appreciated the US soldiers’ professionalism as they were not slowed down even by the weather conditions and arrived on time.

The convoy is composed of 150 military vehicles and some 550 US soldiers. They travel from Vilseck, Germany, to Hungary where they will participate in the Brave Warrior training. It will be attended by 1,800 soldiers from seven countries, including Slovakia.

Its arrival was also accompanied by the protesters of the far-right People’s Party – Our Slovakia and sympathisers of the far left. Some were holding Russian and communist flags and had pictures of Russian President Vladimir Putin on their t-shirts. Among the demonstrators was also former presidential candidate Ján Čarnogurský, the TASR newswire wrote.

Alongside the protesters were also dozens of NATO supporters, who were waving the alliance’s and US flags, TASR wrote.