THE DAYS when drone users could ignore rules and fly them just above people’s heads seem to be over. As drones are more common and receive increased media attention, authorities are growing more concerned about their use by ordinary people and firms. 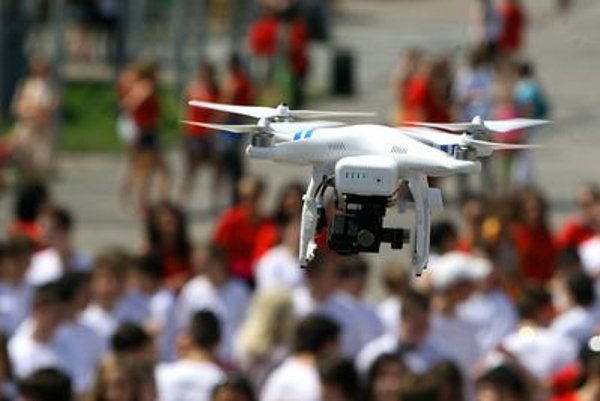 Drones should not fly over crowds. (Source: Sme)
Font size:A-|A+9

The Transport Authority set specific rules on the use of drones on August 18. Some rules, however, have been effective since the late 1990s as part of legislation concerning aerial work and the protection of classified information. For example, legislation requires that drones not be used in municipalities or close to crowds.

Some firms approached by The Slovak Spectator say the rules are too strict and have forced them to close their business. For example, Geokarpatia company tried to do low-cost aerial photography but was too limited by the rules, according to František Komara of Geokarpatia .

“Currently we are considering whether we should do business with drones or not,” Komara told The Slovak Spectator. “There is not a problem to fulfil all the state’s condition for flying but we are limited in drones’ use regarding photography or filmmaking.”

The Transport Authority does not plan to initiate any legislative changes related to the use of unmanned aerial vehicles, spokeswoman Miroslava Janušicová told The Slovak Spectator.

In cases where a drone weighs less than 20 kilogrammes and has neither a camera nor a video camera, it is not subject to any restrictions, Transport Authority head Ján Breja and head of the civil aviation division, Martin Němeček, told the press on August 25.

However, if a drone weighs more than 20 kilogrammes or has a camera, users need permission from the Transport Authority. In addition, users must pass theoretical and practical exams.

It is not an easy task to get a drone licence and it often takes several weeks. Applicants need to fill out paperwork, many of which are not directly related to drone use at all. Some are the same ones completed by companies that provide first aid service by helicopter, according to professional moviemaker Albert Rafaj.

Use of an unregistered drone can lead to a fine of €330. The Transport Authority has registered just six drones to date, the SITA newswire wrote.

While registration of a drone is free, the licence that is valid for 12 months costs €600. However, this is not a big price for moviemakers, according to Komara.

If people want to use drones for taking pictures or video recording sites, they need the consent of the Defence Ministry because such activity is considered aerial photography, which is limited by law.

The ministry wants the application for using a drone submitted a few weeks in advance, which is a hassle for filmmakers whose work depends on the weather, according to Rafaj.

“We are discussing whether we go to shoot or not an evening before shooting takes place,” Rafaj told The Slovak Spectator. “We usually don’t have orders with a specific date for shooting several weeks in advance.”

Drones are only allowed to take pictures or make films during daylight, must be visible at all times and must be insured.

Moreover, filmmakers are not positive whether they can use their shots even after the work is done. They need to show them to the Defence Ministry which then decides if they can be released.

The biggest obstacle however, is to shoot images involving people and shooting in municipalities. If a filmmaker wants to do so it has to predetermine the space where the drone flies and people cannot enter. People must be 50 metres away, including people or actors aware they are on camera. The same distance applies for buildings, which makes shooting in streets almost impossible, according to Komara.

Ordinary people without a licence are only allowed to take pictures with drones when shooting on their own property, according to Juraj Dudáš, head of the Unmanned Aerial Vehicle Association (UAVAS).

“The ordinary hobby user of a drone with a camera is in the position of an illegal user in such cases,” Dudáš told The Slovak Spectator.

Rafaj said that although the current legislation is too strict, some rules for using drones are needed. He said there are many irresponsible users who buy a drone for several thousand euros and go to shoot street life, people and vehicles without proper training, adding it causes a bad reputation for drones that then harms professionals.

The Slovak Spectator spoke with a firm that uses drones to shoot weddings. The firm said they had an accident in one Slovak city. In times when authorities were not checking drone use so strictly, the firm navigated the machine in streets and it flew behind a building before losing the signal with its operator.

“It harmed no one but ended up on the roof of a building,” said a person with the firm who requested anonymity.

There have been several cases of illegal use of drones which made headlines in the past. For example, Prime Minister Robert Fico complained about a drone with a small video camera disturbing his privacy when flying regularly past his window in November 2014.

“What is it about?” Fico said during a discussion on the TA3 news channel. “Someone wants to see me in my pants?”

“The image of drones is so bad people ask us whether we are planning to drop a bomb somewhere with it,” Rafaj said.