IN AN OPERATION against refugees, Hungarian police assaulted and detained foreign journalists including a Serb, a Pole, an Australian and a Slovak, the Denník N daily for which she writes reported. 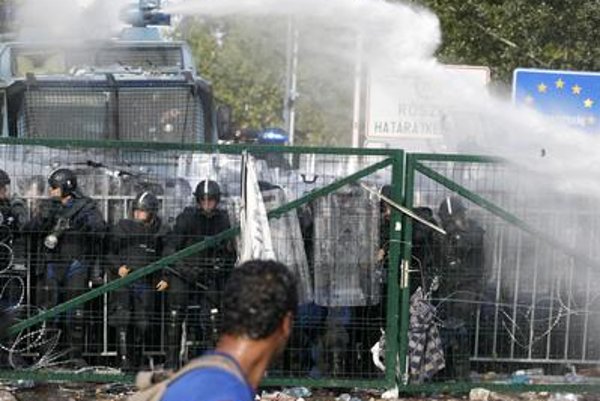 On September 16, violence erupted on the Hungarian-Serbian border: Hungarian police attacked refugees with tear gas and water cannons whilst trying to cross the border into Hungary which had been completely closed off with a wall and a police cordon.

In the raid, police assaulted and imprisoned several foreign journalists, including Slovak, Tímea Beck, together with Jacek Tacik from Poland and an Australian journalist. Tacik was seriously injured according to Beck, who added that he was eventually treated and had to pay cash for the treatment. (Later, it turned out that his injury was superficial; and he was aided by a Polish consul.) Beck was beaten on her leg and back, and she was brutally handcuffed, kept the whole night at police station and later charged with illegally crossing the border.

“It all happened while we were watching with a group of journalists how a crowd of refugees tried to get to the Hungarian side across the fence,” she said, as quoted by Denník N. “I helped one family to get up from the ground when police grabbed me. They started beating me with a baton, tied my hands very tightly with a plastic strap, and threw me to the ground. Police insulted me in a vulgar way and accused me of something which they had done, pulled me to the Hungarian side of the border.”

Then, she was detained and interrogated for several hours, along with refugees and other journalists.

Beck also accuses Hungarian police of using tear gas on Serbian territory, and that is why Serbs are sending a protest note to Budapest. The Serbian journalist association has also protested in favour of their three beaten journalists. UN Secretary General Ban Ki-moon said he was shocked and appalled by the event and deemed such behaviour unacceptable, as quoted by the BBC.

Slovak media have asked their Foreign Ministry for a stance on the inadequate action against refugees and journalists. The ministry reacted that “it is investigating the situation”.