IN SLOVAKIA, reports of arms and ammunition from World War II, mostly still functional, occur quite often even 70 years after the end of the war. 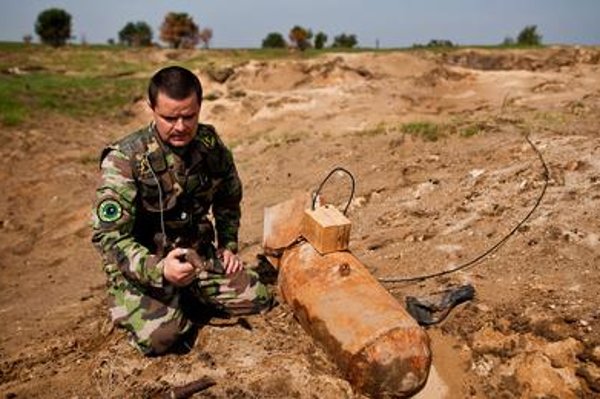 The police were informed by a local man on September 10 that he had found wartime ammunition in a scrap metal yard on Bardejovská Street in Svidník, a town in the Prešov region (in eastern Slovakia). Police sealed off the site until a bomb disposal technician from Prešov arrived, Prešov region police HQ spokesperson Jana Migaľová told the TASR newswire. The technician found four stabilisers for mortars, four shells, one mortar bomb and almost a kilogram of projectiles dating back to World War II. The ammunition was removed from the scrapyard for disposal.

On the same day, an anti-tank landmine from World War II that had been discovered during the construction of a road between the villages of Nižná Polianka and Smilno in the Bardejov District (also in the Prešov region) was destroyed in a controlled explosion by a bomb disposal technician. The find was announced to the police a day earlier by a 37-year-old man from the nearby village of Harhaj.

During an inspection, the bomb technician discovered that the device had been damaged and so was unsuitable for transport. “The landmine was therefore disposed of by a controlled detonation on the spot,” Migaľová told TASR. “There was no injury to health or damage to property in the explosion.”

The police remind the public that if they find ammunition or an object that resembles ammunition, they should not tamper with it. “You should remember where you found it or in some way mark it so that it can be found again. You should then report this at the nearest police station or via phone, number 158,” Migaľová said, adding that in built-up areas and other places where people are moving there is a need to seal off the spot until the arrival of the police or bomb disposal unit. “Many cases of accidents or fatalities have been recorded with regard to the improper handling of ammunition,” she summed up.