BUSINESSES complain about too frequent changes in legislation, the high burden of taxes and levies and a selective support policy. Their representatives are calling for measures to improve the general business environment. 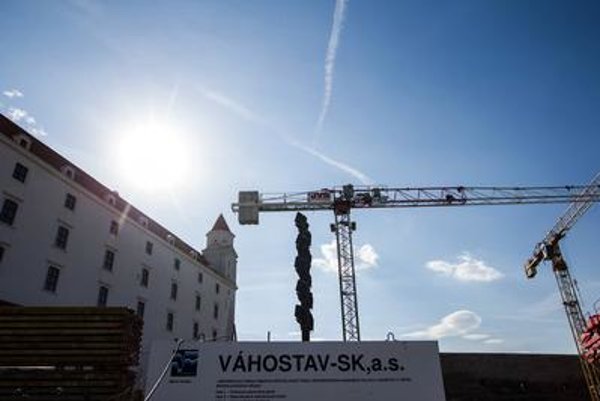 Problems of the construction company Váhostav-SK have contributed to a worse perception of the business environment in Slovakia. (Source: Sme)
Font size:A-|A+0

The business environment in Slovakia is measured by the Business Environment Index (IPP) based on findings from a quarterly survey conducted by the Slovak Business Alliance (PAS) among its members.

The index has shown a decline in Slovakia's business environment over the past decade. In the second quarter of 2015, the IPP recorded a drop of 2.24 percent quarter on quarter to 58.5 points. The index has been declining since 2006, except for one quarter in 2010.

PAS ascribes the recent drop particularly to developments around the construction company Váhostav-SK. The biggest decline was reported in the category of law enforceability and judiciary and employment of the principle of equality before the law. Businesses also complained about a high administrative burden, which has not been reduced despite several promises by the government to do so.

Further criticisms include rulings issued by the Supreme Court panel led by the court’s former head, Štefan Harabin, who stated that the Interior Ministry inspectorate was illegal.

On the other hand, business owners positively evaluated all areas that fell within their own influence over the business environment and also access to money. PAS ascribes this especially to the politics of the European Central Bank and related revival of the economy.

“In general it can be said that business people see positive changes in their business operations thanks to the growth of the economy, exports, as well as domestic demand after goods and services,” PAS wrote on its website. “But from the side of the public sector there are arriving rather negative signals and steps making doing business more difficult. This may lead to caution of entrepreneurs when making new investments, extending their production and hiring new employees and in general to slowing economic growth.”

Economy Minister Hudák refers to the problem of red tape as one of the most sensitive.

“There are too many directives and regulations which are inappropriate and useless in some sectors and thus they are breaking down business activities,” said Hudák in an interview with the Goodwill magazine, adding that an analysis of his ministry indicated that there are more than 4,000 information duties for entrepreneurs in 2014. The ministry calculated total administrative costs of the business environment at €2.67 billion.

According to Hudák, there some measures have already been made toward reducing red tape, for example simplification of starting a business via contact places and the launch of the electronic system of the social security provider Sociálna Poisťovňa. During the first half of 2015 the ministry elaborated a proposal of measures for improvement of the business environment and reduction of the administrative burden. It contains more than 60 measures stemming from initiatives of entrepreneurs themselves.

Other organisations representing businesses also reported a decline in the business environment, criticising the Robert Fico government for a selective support policy, within which it allocates investment incentives and provides other supporting measures only to selected companies, industrial sectors or regions instead of improving the overall business environment.

The Institute for Economic and Social Analyses (INESS) has stated that various schemes of state support cannot compensate for the generally low quality of the business environment. Martin Vlachynský, analyst with INESS ascribes the current unfavourable business environment to the high burden of taxes and levies and extensive red tape that the state has not reduced even by its e-government programmes.

Martin Hošták from the Republican Union of Employers (RÚZ) agrees that effects of selective measures are limited. In his opinion support measures for poor regions or so-called hungry valleys adopted by the Fico cabinet within its so-called social packages is only a compensation for the not very favourable business environment that should revive investment activity of companies in given regions. He believes that unless nationwide measures to improve the quality of the business environment are not adopted, this or the next cabinet will be forced to adopt various compensation measures that are relatively expensive and with limited effect.

“Real hungry valleys are regions of Slovakia with a very low education structure of the population, with lack of a qualified labour force, a large number of the unemployed and missing infrastructure,” said Hošták during a discussion programme on the TA3 news channel, adding that the best solution would be adoption of nationwide measures increasing the quality of the business environment. This is because it is very difficult to compensate, for example, measures worsening local situations like increasing prices of energy for industry and increasing the minimum wage by investment stimuli and other supportive measures.

Vlachynský also sees the policy of investment stimuli as harming when he has calculated that since 2002 Slovakia has spent €1.5 billion in total on investment stimuli for foreign companies. Among reasons against investment stimuli he listed the reason that stimuli do not help backward regions. This was a result of an analysis in which INESS looked into the development of unemployment in the poorest regions between 2002-2014.