THOUGH rallies against corruption or immigration can draw thousands of people, none recently held in Bratislava brought more to the streets than the second National March for Life. 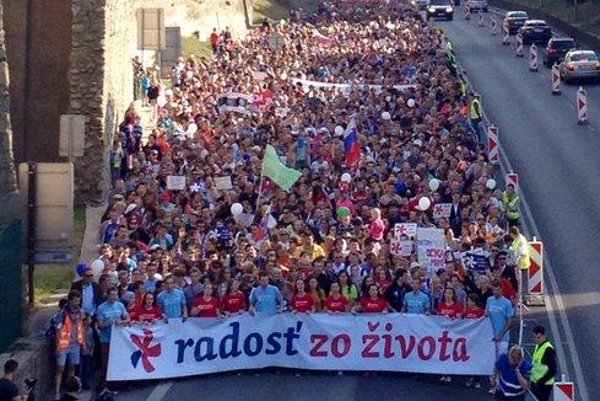 The September 20 event, with a declared purpose to push for amending legislation covering the protection of life and to help pregnant women in a crisis situation, drew some 70,000-85,000 people, organisers said. Security analyst Radovan Bránik who oversaw the whole event estimated the participation rather lower, only at some 45,000-50,000. 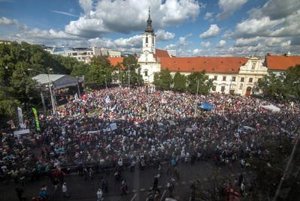 “We managed to repeat the miracle from Košice,” organiser Marek Michalčík told the press, in reference to the previous version of the event that drew 80,000 people.

This has confirmed that the protection of life is still a serious topic which many people are interested in, he continued.

Analysts however say that the family and its protection is not a hot political issue and do not expect much to change before parliamentary elections. Moreover, some even questioned the sense of the march since the number of abortions, against which the organisers were protesting, is the lowest in the last 50 years.

Organised by the Conference of Bishops of Slovakia (KBS) and supported by dozens of Christian organisations, including the Alliance for Family which organised the failed February referendum on family issues, the day included a host of events taking place in the capital's downtown area.

Though the march in Bratislava may look similar to the one in Košice held in 2013, from the point of organisers they were two different events, Michalčík said.

“In Košice we were preparing something people could not even imagine,” he told The Slovak Spectator. “Thus the turnout in Košice came as a big shock, also to us.”

They wanted to continue in this activity also in Bratislava, but were prepared that the effect will not be the same since it will be the second year of the event. Moreover, Bratislava is the most liberal region in Slovakia.

“Thus I really appreciate the outcome of the Bratislava march,” Michalčík continued, “and for us as organisers it was maybe bigger and better surprise than the first Košice rally.”

Also the Slovak bishops were satisfied with the event and its course.

“I want to express pleasure and gratefulness,” Auxiliary Bishop Jozef Haľko of the Archdiocese of Bratislava said, as quoted by the SITA newswire. “The community of those who profess the joy of life and want to protect life is very large.” 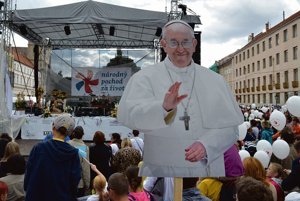 The marchers also endorsed the Manifesto of the National March for Life 2015, which called for better protection of life and the system of aid to pregnant women in need.

“As members of this society we are aware of our complicity in the current state when we, as part of the silent majority, did not protect the right to life and did not create appropriate conditions for its development,” reads the manifesto. “The current state is so serious that it calls us to make specific steps, to stand for the protection of every human being, including unborn children.”

The organisers also called on public officials, particularly MPs, the government, the president and other state institutions to create legislative conditions to protect the human life; to protect the bond of a man and a woman; to create mechanisms and economic and social conditions in which families may give birth and raise children; and to support institutions to help families in need and pregnant women.

“I expect that they [the politicians] will adopt some of our recommendations into their election programmes and will promote them after the elections,” Michalčík said.

Though he does not think all parties will deal with the topics, he stressed that “it is a task of civil society, so also the participants in the National March for Life, to remind of these topics since politicians have a short memory”.

One of the crucial requirements that organisers posed before politicians was also a proposal to limit abortions so that they cannot be completed based on the sex of the child, or for economic or social reasons, Denník N wrote.

The number of abortions, however, is already the lowest in last 50 years. Just 7,500 abortions were reported last year, which is 5.43 per 1,000 women of reproductive age, according to Denník N.

This is a result of better planning of parenthood, spreading the contraception and raising the public awareness, sociologist Sylvia Porubänová told the public-service broadcaster RTVS. She also considers the rally an effort to reopen the agenda discussed two years ago in Košice. It was also against abortions, other types of family and euthanasia, as reported by Pravda.

“It is only kicking out the open door,” the sociologist told the Pravda daily.

Michalčík however stressed that it is their long-term effort to let every child to be born.

Moreover, some however consider the rally a strategy to promote the church’s interests via a demonstration of power.

“The March for Life if not a bad idea,” priest Karol Lovaš told Sme. “It is however abused by the church to demonstrate its own power.”

He also considers it an effort to “hide the real problems of the Slovak church”.

Sociologist Miroslav Tížik from the Slovak Academy of Sciences (SAV) said before the rally that it will be used to create an idea about how the public looks and what it wants.

“Also thanks to the mobilisation from foreign countries this creates a picture that it is the interest of the whole Slovak public,” he told Sme.

The rally, however, attracted also extremists. No incidents occurred during the rally, Bránik told Denník N.

Organisers have distanced themselves from any expressions of violence or hatred, Michalčík said, adding that they have not noticed any extremist expressions during the march. He stressed they cannot prevent these people from attending.

“We can only ask them to withdraw their symbols, what we actually did, but it is up to them whether they do it or not,” Michalčík said.

No impact on the campaign

Though the rally’s organisers stress the importance of the topics they raised, political scientist Miroslav Kusý does not consider them an acute problem.

He went on to say that the traditional family in Slovakia does not face the threats the organisers are talking about.

“It decays on its own,” the political analyst claimed, adding that this trend can be seen also in the rest of the world.

The only ones who may benefit from discussing these problems are priests, not politicians, Kusý added.