THE “PRIDE Dúhové Košice / Košice Rainbow Pride event took place on theafternoon ofSeptember 26, with the slogan “The Rainbow Connects Together”, attended by about 200, mainly young, people. 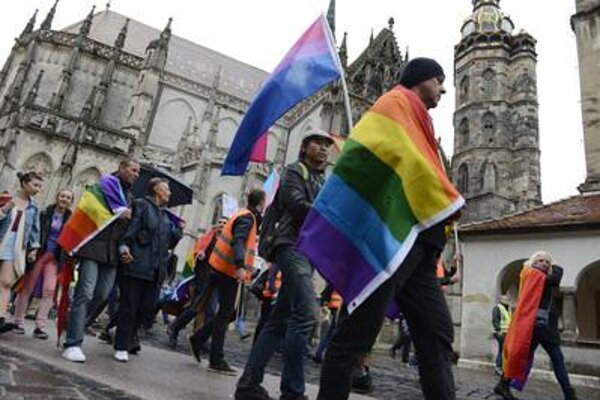 There was a group of opponents of the event awaiting the group, but no incidents took place.

The parade’s aim was to show support for the rights of the lesbian, gay, bisexual, transgender and intersexual (LGBTI) community and make them more visible to the public.

“The goal of the Kosice Rainbow Pride was to bring people to the streets and to allow us to – once a year – proudly carry our identity through the city and to show a sign to those that are afraid to pick up their courage and to decide to live their lives in truth to themselves, to others and to the society,” the event’s director Robert Furiel explained for the TASR newswire.

The participants of the third annual parade walked from the Kulturpark through the Main Square into the Tabačka Kulturfabrik, where the event culminated with concerts.

“The attendance was again higher than the previous year,” Furiel said. “Another reason for joy is that we walked through the streets without any incidents, and I have the feeling, moreover, that there also were fewer protesters than last year.”

He appreciated police measures for the parade’s protection.

In front of Kulturpark, several black-clad young people were waiting, the SITA newswire wrote, adding that there was another group there, with various songs like God Loves Homosexuals, but Hates Homosexual Acts; Homosexuality is a Certain Retardation of Sexual Development, and some others, but they did not disrupt the Dúhový Pride.

Among the participants was also US Embassy to Slovakia’s Charge d’Affaires Liam Wasley.