THE PUBLISHER Ede Feitzinger enjoys a special popularity among collectors of old postcards. This postcard of the village of Važec in the Liptov-region from the beginning of the 20th century shows the reasons why; he consistently showed interesting details and included people, as seen in this postcard. 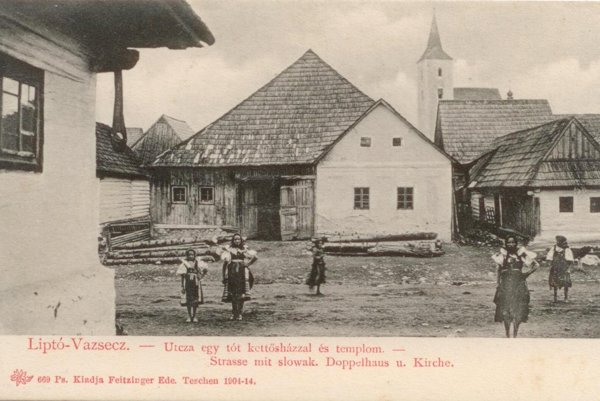 The village of Važec, Liptov region (Source: Courtesy of B. Chovan)
Font size:A-|A+0

Women in festive folk costumes are slightly arranged by the photographer, but they do not make a disturbing impression.

Nowadays, we would search in vain in Važec for the huge wooden barn in the central part of the postcard, as well as the other houses built of wood. The village burnt down to the ground during the almost legendary fire in 1931.

Let us go back, though, to the very beginning of this village when this part of the country was covered by dense forests. It took inconceivable effort to construe a village in such wilderness. The task of the first settlers was, more or less, to fight against nature. Važec is mentioned in historical records for the first time in 1269, when the very first houses stood here, and the whole territory belonged to a lord with the Slavonic name of Bohumír. The names of village representatives sounded more Germanic, however, with names like Gerhard or Leuchman. From the Slovak point of view, this is arguably a very interesting fact, as Važec is often perceived as an originally Slovak village that could serve as an etalon of true and untainted “Slovakness”. But we will have to cope with the fact that there is much more mixed blood in our veins than it may seem.

Animals living in the area today would also be surprised by their predecessors. It seems that as late as the Middle Ages a massive animal called tur (in Slovak) or urus, a type of wild ox, lived here but has since gone extinct. One of the local names of Važec – Turie pole – points to this fact.