MEDICAL workers launched an initiative on September 28 that might have serious consequences, as they are collecting signatures for a declaration on their readiness to hand in their resignations, Nurses’ and Midwives’ Union head Monika Kavecká said at a briefing in front of the Government Office. 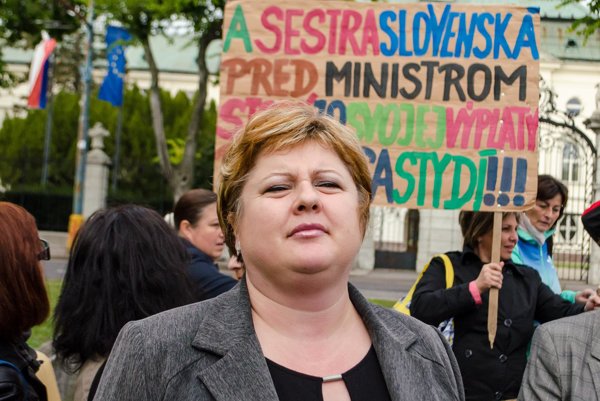 Medical workers’ representatives have criticised a planned law regulating their salaries. “We, medical workers, have come together to protest against a proposed bill and to express our will to resign from our jobs,” Kavecká said at the briefing on September 30. “For three years, nobody has listened to us, and after negotiations that were more of a monologue than a dialogue the Government proposed this bill,” she summed up, also referring to mass resignations by doctors in 2011.

Even a small number of people resigning would lead to the collapse of the health-care system, Kavecká claims. “The declaration will be a test of health-care employees – whether they’re still willing to work in this sewer or whether they’re willing to do something in order to change it,” head of the Slovak Nurses’ and Midwives’ Chamber, Iveta Lazorová, asserted, as quoted by the TASR newswire. To avoid signing the declaration would mean that medical workers are not willing to bring about change, she added.

The declaration incorporates five demands. Medical workers want proper financing of medical facilities, as well as a law adjusting the salaries of all medical workers regardless of where they work. It should not concern only hospitals, as the Health Ministry currently proposes, but also outpatient departments, spas, health resorts and other facilities. There is also a call for maternity leave and sick days to be calculated into total professional experience, to increase the number of nurses and midwives in the health-care system, to raise their salaries and to show more consideration to staff vis-a-vis the number of years that they have worked.

Health Minister Viliam Čislák reacted by saying that he sees no reason for resignations, as the ministry has fulfilled all of the conditions tabled by medical workers.