THOUGH a wider overhaul to Slovakia’s 40 year old construction laws remains on hold, parliament adopted a limited revision September 30 with the goal of easing the arrival of carmaker Jaguar Land Rover’s new plant. 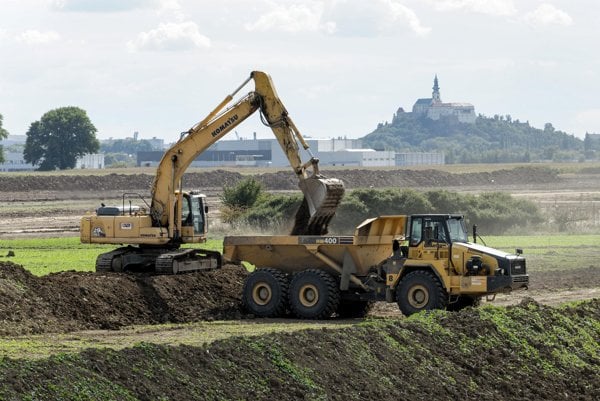 Some in the opposition are asking President Andrej Kiska not to sign it into law.

“The aim of the revision is to make permission processes more effective… and in this way to improve the attractiveness of the business environment in Slovakia,” wrote the Ministry of Transport, Construction and Regional Development that prepared the revision.

Thus significant investments should receive permission for construction projects within the shortest possible time period. The revision will become effective the day it is published in the Collection of Laws “because of urgent general interest”.

The draft revision went through the discussion in parliament via a fast-track proceeding aiming at easing the arrival of Jaguar Land Rover (JLR) which looks set to build a new plant near Nitra in western Slovakia and invest hundreds of millions of euros. The cabinet estimates that talks with JLR should be completed by the end of the year while works on a so-called strategic park where the investment may land are already underway.

JLR, owned by India’s Tata Group, announced its selection as its preferred location for a new plant on August 11 while it has already signed a letter of intent with the Slovak government for the potential development of the new plant.

Opposition deputies criticised the fast-track proceedings, arguing that there was no reason to hurry. They warned that the revision creates space for speculation with land and that it might be unconstitutional. Several officials say they may ask Kiska to return it to parliament.

The legal think tank Via Iuris has called on deputies not to pass the revision due to its significant negative features and argued that it falls outside Slovakia’s larger construction laws. It pointed out that the revision omits the duty to carry out the so-called development permit process in cases of so-called strategic parks. Thus one of the permission processes within which projects are assessed against local master plans are cut out, without being replaced.

Also the accordance of constructions and other activities in the given area, for example in terms of care for the environment or based on architectural or city planning values, will be not assessed. Land owners affected by the location of the strategic park will be significantly weakened.

Via Iuris also fears that the environmental impact assessment will be only formal.

Imrich Vozár, a lawyer cooperating with Via Iuris, pointed out that results of environmental impact assessments are normally examined during the development permit process.

“But when the development permit process does not take place, it is not clear where the results of the process of environmental impact assessment will be reflected,” he said.

Via Iuris sees the activity of the government to help carry out ‘strategic investments’ as natural.

“But permission proceedings of any investments should be carried out in a non-discriminatory environment which will not put investors of one construction at disadvantage toward other investors,” they write on their website.

Preparation of a brand new construction law has been on the government’s agenda for years, and work on the current version began in 2012. But it now looks like the plan to have it effective as of July 2016, already postponed from 2015, will fail. Transport Minister Ján Počiatek withdrew the bill, which would replace a 1976 law, from discussion in parliament on September 22 after criticism from the opposition. The aim of the new Construction Act was to accelerate construction, increase effectiveness but also to intensify the fight against illegal construction.

“We will try to achieve consensus as I think this law is important and should not be the subject of primitive political discussions, as it was showed by MP [Igor] Hraško,” Počiatek said, as quoted by the SITA newswire.

Počiatek responded to the criticism by Hraško who read in parliament comments by the Urban Development Institute (IUR), a non-profit association representing professionals involved in the area of land development and planning. IUR opines that in the law negatives outweigh positives and that if approved in the current wording, it would cause chaos in land planning and would prolong construction especially for small builders.

The ministry has reiterated that this draft bill represents the greatest possible consensus. Počiatek has not given up the plan to have this law passed by the end of the term of the current cabinet when next parliamentary elections are scheduled for spring. Excluding the present parliamentary session there will be only two more sessions.

The ministry says it wants to find strong support across the whole political spectrum for the bill, but the discussions should be held on an expert level and not on the basis of interests of lobbyist groups.

“The bill was prepared well as a result of compromise negotiations under often opposite interests,” ministry spokesman Martin Kóňa said, as cited by the SITA newswire. “The bill was being prepared for a very long period of time and dozens of experts, practicing professionals, were working on it.”

The ministry also argues that it has taken into account feedback from the general public.

“The minister has said several times that it is an exclusively expert law that he does not want to push through politically and that he would withdraw it from parliament if a society-wide consensus did not exist,” Kóňa said.