THIS year’s Konvergencie festival, which always brings chamber music and its fusions to Bratislava (and recently also to Košice), also included a host of anniversary celebrations — even a birthday cake. 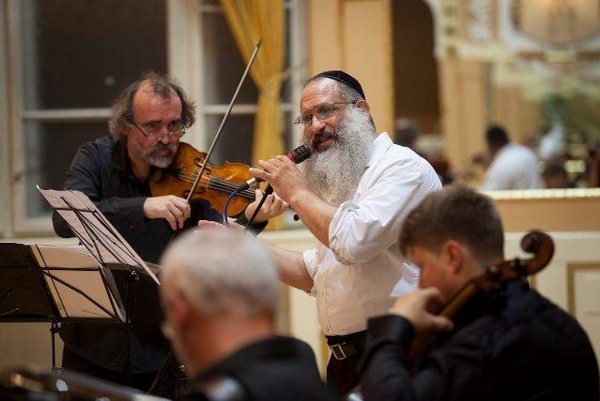 “This year we tried to find new things – untapped before – and we have used the fact that several musicians we have collaborated with previously have had anniversaries – composer Roman Berger, Martin Burlas, Boris Lenko and also Daniel Salontay,” festival organiser Jozef Lupták told The Slovak Spectator.

Salontay performed in the opening concert (in the Longital duo) September 10 which combined rock/alternative music with a string quartet. The concert on September 14, Annum per Annum, was a celebration of the 80th birthday of Estonian composer Arvo Pärt (who was present at the festival 14 years ago in person, this time only symbolically through his music). Three of Pärt’s works were played, with one by John Tavener and one by Slovak Vladimír Godár, all selected to evoke a spiritual atmosphere. The absolute silence in a packed St Martin’s Cathedral, where one could hear even the sound of rain on the cathedral’s walls and roof, added to the ambience.

The celebration on September 16 was a different cup of tea: after Jewish-inspired classical music of Shostakovich, Prokofiev and Slovak premiere of Paul Schoenfield’s Trio for Clarinet, Violin and Piano, The Chassidic Songs, in cooperation with Bratislava Rabbi Baruch Myers, made an appearance. As more lamenting, gloomier songs alternated with swifter, more vivid pieces, the overall mood was animated even before the accordionist, Boris Lenko, got a cake for the 50th birthday.

The venues were also much more varied this year: apart from the usual headquarters, the design factory in the industrial heart of the capital, concerts took place also in other halls, the main city cathedral, and a memorial house for the musical Albrecht family.

The final evening of the festival featured the Hungarian Qaartsiluni Ensemble with Slovak violinist Milan Paľa. The ensemble played, in a Slovak premiere and at the presence of Ádám Kondor, a Hungarian contemporary music composer, the composition Bizzare Objects XV. The trio, featuring apart from Paľa clarinet player Lájos Rozmán and pianist László Borbély, played also Béla Bartók’s Contrasts, Sz 111. The concert was dedicated to the Arcus Temporum festival in Hungarian Pannonhalma, which did not take place this year.

The concluding concert of the whole festival, on September 20, diverged from the norm.The first band of the concert, Ospalý pohyb, played deeper, more intimate music, than is expected for a headliner of huge events. The band was active – in a different composition – in the 1980s and 1990s, but has remained active as a side project for the musicians who also have moved on to other projects. Their music is slightly psychedelic alternative and, unfortunately for foreigners, lyrical. Noisy and obtrusive lead singer, Martin Burlas (another birthday boy) offered also an ironic, funny and catchy style.

After Ospalý pohyb (Sleepy Motion, in English, composed of Peter Zagar, Pavol Hubinák and Daniel Baláž) gave one encore, Norwegian songstress Susanna Wallumrod followed. She sang at Konvergencie three years ago, but this time, she brought to the Ateliér Babylon music club her project with her two colleagues, Helge Sten on guitar and Fredrik Wallumrod on percussions. Singing works of various other musicians, but also her own, evoked a strange, even meditative mood that did not collide in any way with the feelings left by the previous band. Although the concert started late and took two and a half hours, people asked for encores. The choice of the alternative bands and projects fitted perfectly into the definition of chamber music as festival’s main theme.

Visitors intrigued by the Konvergencie concerts should watch for events within the Bratislava Goes Classical series; including in early February 2016, the ambitious project of 15 quartets by Shostakevich played in four (plus one special) concerts. More information can be found at konvergencie.sk and bagoesclassical.sk.