Slovak children whose parents have low education likely to grow up poor. 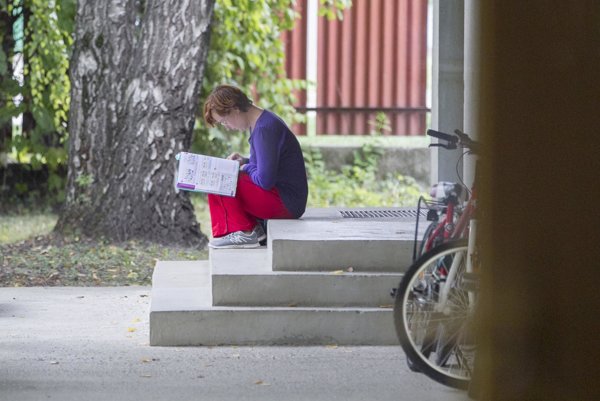 CHILDREN with parents who have only primary education are unlikely to obtain a university degree. According to an OECD study just one-fifth of Slovak young people from such families do so, a sign of how social mobility can be hampered from a young age.

According to Vladimír Burjan, director of Exam testing and editor-in-chief of Dobrá Škola magazine, said that there is a high probability a child born into a poor family with basic-education will end up poor as an adult.

“The future fate of children in Slovakia is often predestined already at the moment of their birth,” Burjan told The Slovak Spectator.

Inheritance in socially disadvantaged families affects not only education but also subsequent employment. It leads to a widening of the gap between social groups, according to Jozef Miškolci, researcher and project manager director of at the Slovak Governance Institute.

“With the current technology and the dynamic structure of the labour market, it is undesirable to inherit the existing social distribution,” Miškolci told The Slovak Spectator.

In contrast, Martin Krekáč, director of HR company Jenewein Group, thinks that inheritance occurs more often only in families with doctors, lawyers, architects or artists. Family firms which have already operated according to the traditional western model also fit the pattern, Krekáč said.

Although Slovakia’s constitution defines education as a free service and most of the people perceive it as a means to a job, children’s interest has been mostly determined by parental priorities.

Zuzana Kusá, a sociologist with the Academy of Sciences, says that parents with higher cultural capital and social status motivate children to learn, school results are emphasised and high level discussions develop a child’s abstract thinking.

“On the contrary, in households without an educational tradition in which school results affect parents’ emotions very little, even a talented child has no motivation for learning,” Kusá said.

Burjan stressed that parents without higher education do not connect education with a potential higher quality of life, and therefore do not provide appropriate studying conditions for children.

Additionally, the country is influenced by the tradition of physical work and faith in diligent hands multiplied by the schools’ inability to create a more stimulating environment, according to Kusá. Slovakia has among the highest unemployment rates for people with basic educations in Europe.

“It means higher attention for people with low education and qualifications abroad,” said Kusá, adding that in case of Slovakia this indicates low development in the service sector.

Peter Peregrim, operations director of the personal agency Adecco Slovakia believes that low income of does not allow reimbursement of a child’s dormitory or travel costs, “thus also its studying opportunities are reduced”.

Educational inheritance has a negative impact on the labour market, according to HR companies. Experts of Adecco propose focusing attention on the quality of schools that is directly proportional to unemployment rates in struggling regions of the country.

The bad situation in schools contributes to the creation of a region with inheritably low-class education and subsequently to bad economic and social conditions in the region, according to Peregrim.

In recent decades the Slovak education system has depended on auxiliary activities by a child’s family, Kusá said.

“It is a huge handicap of the child who does not have educational tradition, abstract thinking and even does not know the language in which education is provided,” she said.

Burjan said that such education shortfalls perpetuate poverty into future generations, limit social mobility and make it difficult to engage in society.

“Such people do not understand the complicated contracts and forms, or even the daily news,” Burjan said.

The role of the state

Currently, the Slovak system has used specific tools to help socially disadvantaged children including increased access to pre-school education, specialised classes at the primary level, food and other subsidies to encourage attendance, assistance for those in material need and support for schools granted by development projects and projects of the European Union.

However, Kusá stressed that even a higher number of teacher assistants, kindergarten from three years, full-day teaching or perception of the fact that more than half of socially disadvantaged children do not speak the language of tuition at home does not compensate the problem of children living in the poorest conditions. Poverty inheritance can be reduced only by parallel investments in housing, education and other services, she said.

“Early intervention in the education may prevent a child from inheritance,” Kusá said. “The school success prerequisites build up in the second year of life, some of them already before nativity.”

Burjan proposes a system inspired by the Nordic countries. In Finland, students graduate without an indication of family environment influence, thus it does not matter whether their parents have basic or higher education, Burjan said. He added that there should be all-day education for socially disadvantaged children in the form of strong personality patterns among teachers.

However, it is necessary to improve the remuneration of teachers and more fundamental acknowledgement that nurturing and educating children is an important profession, Kusá said.