Henry VIII. and Elizabeth I. will meet on stage in Pezinok

Who built Stonehenge? And how many wives did Henry VIII kill? The Bear Educational Theatre from Prague will give answers to even more questions about English history at the festival of English speaking theatre Bridgin'V4. 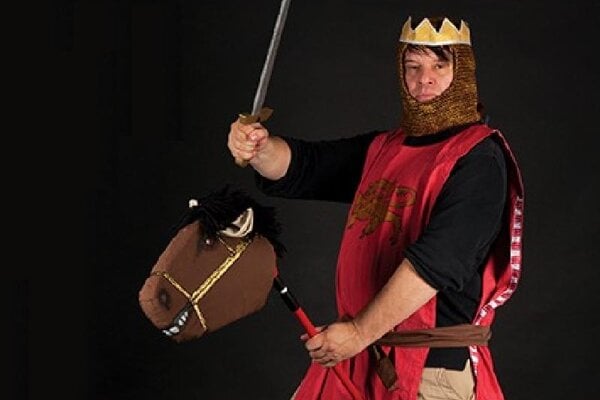 Henry VIII. and Elizabeth I. will meet on stage in Pezinok (Source: Frank Novotný)
Font size:A-|A+1

Bridgin'V4 will host theatre groups from the Visegrad group countries - Slovakia, the Czech republic, Poland and Hungary along with a special guest from Austria. It will be held on the 15th and 16th of October in the Culture Centre in Pezinok (just a 30-minute drive from Bratislava).

In this blog we will gradually introduce all five theatre productions to be offered at the festival. The third is a theatre from the Czech republic.

The title of the performance is The History of England Part 1 and its aim is to introduce the main events of English History in a light and entertaining way. It covers the period of the Anglo-Saxons, The Battle of Hastings, the War of the Roses and the reign of Henry VIII.

The show is also quite interactive and features a very light-hearted competition between two audience teams. There is also a word quiz where the audience has to guess which original language some modern English words are derived from.

The History of England Part 1 shows are mainly aimed at Secondary school students who may be interested in learning about English History, but they have also been enjoyed by younger students. This is the most popular show of The Bear Educational Theatre.

The performance can be seen at the festival Bridgin'V4 on Thursday 15th of October 2015 at 9:00 AM, in the Culture centre Pezinok (Pezinské kultúrne centrum), Holubyho 42. The festival is organised with support from the Visegrad fund. More information at www.anglickedivadlo.sk.