WORLD of the Drums is a festival of percussions and world music that does not have a long history, but has been improving and expanding during its time, winning more and more fans each year and bringing also some side projects and events outside the main programme. 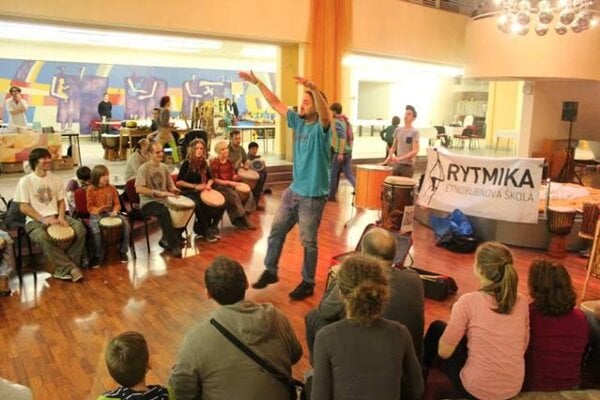 Drum-circle for all fans, beginners as well as advanced. (Source: Courtesy of Shiraz)
Font size:A-|A+15

On October 9 and 10, musicians, bands and dancers from Slovakia, Hungary, Poland, the Czech Republic and southern Italy will perform in the Cultus Ružinov house of culture.

The headliner is Officina Zoe, a band from Salento, which preserves and spreads the folk tradition pizzica taranta, as the oldest musical troupe to do so. At the festival, they will present songs from their recent album Mamma Sirena which has been at the top of world music charts.

Other foreign guests include Szilvia Bognár of Hungary with her band Noé – having managed several successful collaborations with musical stars; Polish band Šango whose members consider themselves “music world travellers”, with percussions dominating their sound. From the Czech Republic, versatile multi-instrumentalist and composer, Markéta Mazourová, will arrive, playing her own works, contemporary and African music.

Special guests of the festival will be blind Roma siblings, Martina and František Ďuďas, who have risen to fame thanks to ethnologist Jana Belišová and her projects to preserve the traditional – and discover the new, contemporary – Roma music. This year, they have become the surprising discovery of the Crossroads Krakow music festival.

“World music means for us the music without limits, which in a way crosses the obstacles in communication and understanding and the common stereotypes in perceiving art,” festival organiser Jarmila Vlčková told the TASR newswire. “In world music, you can rarely find great stars; rather, you can often find people who are true and stick to their freedom, philosophy and passion for music. It is even truer in world music that this is a universal musical way of communicating. It is exactly in this genre that the borders between nations and countries blur. Overcoming isolation, inspiration from other cultures while also respecting one’s own, is the driving force of world music, giving it its individuality and uniqueness,” Vlčková said, adding that the goal of organisers is to include Slovakia more into what is happening on this scene, to bring interesting performers and experts to Slovakia and to present interesting projects that came to exist here.

The programme of the two-day festival includes the popular drum-circle, dance performances, drumming workshop and an after-party at the NuSpirit club.

More information can be found at www.shiraz.sk.