HAMZA Wandera professionally fought for Uganda's national boxing team until government officials found out that he has been violating the law for a long time – he is gay. Slovakia granted him asylum in late September. 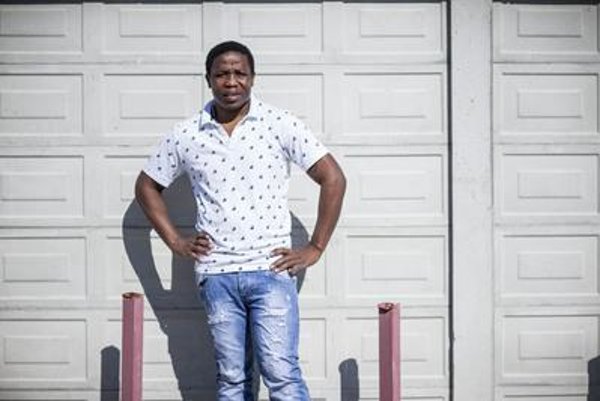 The Slovak Spectator spoke to Wandera about his journey to Slovakia, a shooting he experienced in an Amsterdam bar, his impressions of local refugee camps and his future plans.

The Slovak Spectator (TSS): Why did you leave your country?

Hamza Wandera (HW): I came from Uganda to Slovakia to ask for protection of my life. Uganda citizens wanted to kill me and government wanted to imprison me for the rest of my life because I violated the law.

TSS: What did you do?

HW: People in my country have problems with gay people. And I am gay. I am a professional boxer and people know me in my country. I lost my citizenship and they kicked me off of the national team. If my countrymen catch me they would beat me to death or stone me.

TSS: Many people in Europe say that homosexuality is just a lifestyle.

HW:  I could lose my life because of that. People who hate gays should make their own world.

TSS: How did you try to solve your situation?

HW:  I went to Kenya but they were after me even there. I could not fight there. Whenever I would step to the ring they would catch me. I was hiding all the time and communicating with people only via internet. I was looking for help and met with one woman who protected me and we had a daughter. I do not want to be more specific about this. Last year famous Slovak boxer Tomáš “Kid” Kovács wrote me if I wanted to have a fight with him and I said yes.

TSS: One of the most famous Slovak boxers helped you get here then.

HW:  Yes, I asked Slovakia for a visa to fight with Kovács. The travel here was not difficult because the other side provided me plane tickets, living and food. I had to travel alone because I did not want my countrymen to know that I am going to fight in Europe. If they learned about it they would have sent me to court.

TSS: What happened next?

HW:  I lost my fight and went to the Netherlands to ask for asylum because I have a friend there. However, I was told that I cannot stay in Netherlands because Slovakia granted me a visa and that means that I can get asylum only here following the Dublin treaty rules.

TSS: What did you actually know about European rules on granting asylum?

HW:  Honestly, when I was deciding to come here I did not expect that it can be so difficult. I thought it is enough to have some friends here who would take care about me until I find a job. People in Africa were telling me that people can get asylum just for being here five years. As a professional athlete I have been travelling to Europe relatively often therefore I saw no problem to fulfil such condition.

TSS: By the way, you had some incident in the Netherlands right?

HW:  Yes I had. Some man came to the bar, there was a fight and then he started to shoot at people. He shot one man dead some others were injured. I got three bullets.

TSS: When did you come back to Slovakia?

HW:  In early July I travelled to Poprad city airport and police took me from that place to Humenné refugee camp. I stayed there for two days. Then police took me to a camp in the town of Sečovce. It resembled prison and I asked police what I have done that I have to be in such place. I was not arrested on the street like some criminal, I have been always kept in refugee camps. Police told me to ask nothing and obey the law. So I was quiet. I was supposed to stay in Sečovce for three months but they released me after the first one and took me to a camp in Rohovce village where I have been until now.

TSS: What do you say about conditions in the camp?

HW:  I have no problem with people here. I was in a Netherlands camp so I can compare those two countries. I like about Slovakia that workers here take care about our hygiene, they clean our toilets, canteens or they wash our laundry. In Netherlands they do not cook for us; they give us €50 per week and it is up to refugees what they will buy to eat. Social workers from Slovak Humanitarian Council help us a lot.

TSS: You sound surprised about that.

HW:  When I was in the Netherlands people were telling me to not come back to Slovakia because people here do not like Africans. But it seems to me that both social workers and refugee camp employees are good people. For example, when someone has a problem in morning they will bring him food to their room. What I want to say is that they care about us and how we feel.

TSS: Slovakia grated you asylum and now you are waiting for the beginning of your integration process. Technically you are free to go. Do you really plan to stay in this country?

HW:  I do not want to leave this country because I heard that living here is not so expensive just around €200 per month. When I will fight again and teach boxing I should be able to make money for living. I got used to work because I was not making money only by fighting in Africa. I want to open a gym here in Slovakia. People know me here but the problem is that I have not settled here so far. In next months I plan to open a gym, media will report about that and I expect that people will train with me. I see on social networks that I have many fans in Slovakia.

TSS: Are you planning to invite your family here?

HW:  I want my daughter to come here. She is seven years old and should visit school. However, she has no money to pay fees. I sent her some money after my recent fight with Kovács but I do not know what happened with it. I want her to come here to Slovakia so she can visit school and have a normal life. Money which I am currently receiving covers my needs and pays mobile phone bills so I can communicate with family. But it is not enough for helping my daughter. When she is sick I cannot help her because I do not have work.

TSS: Your daughter is without her father now, how is she?

HW:  There is no one who could take care about her. Her mother has probably a husband now and men in Africa do not take care about children who are not theirs. Luckily, I can have phone calls with her but she is still missing me. She was used to having me close to her. She cries and asks me when I will come back but she does not know that I ended up in Slovakia.

TSS: Economic migrants are a big issue now. You could have came to Europe before your government started to prosecute you just to have a better life. Why did you stay in Africa?

HW:  It is true that I have many friends in Europe who called on me to stay here but I have never wanted to live in Europe. I bought a house in Uganda and I was running a business with renting motorcycles there. I was travelling to Europe just to fight and make some money which I then invested in my business.

HW:  We are friends. Even we fight in ring it does not mean that we are enemies. Sometimes he text me but it is difficult for me to understand Slovak. I have to translate his messages word by word. I have not told him that I am in Slovakia waiting for asylum, however. I want to visit him in his gym in the town of Galanta.