I tend to be rather skeptical of professional athletes, considering them overpaid and over valued. But here are some reasons that Sagan seems like a genuinely good guy. 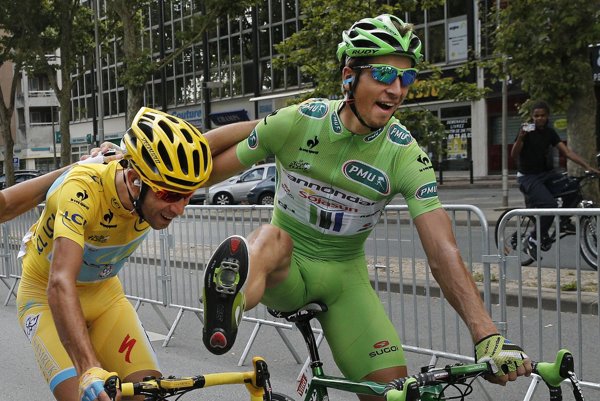 Peter Sagan, this year’s World Champion in road racing, has inspired a love of cycling in many Slovaks. Slovakia is a small country and often feels like it has little clout in the events of the world, politically or otherwise. So when someone does well on the worldwide stage, all of Slovakia feels like it has won as well.

On the day of the championship, which ended at night here in Slovakia, one family I know watched the whole race, including the grade oner who had school the next day. Another family woke up the kids to watch the end of the race.

I tend to be rather skeptical of professional athletes, considering them overpaid and over valued. But here are six reasons that Sagan seems like a genuinely good guy.

6. He started off in mountain biking

This is a purely subjective reason, because I like mountain biking. His superior bike handling skills are, however, probably due to his experience mountain biking. He won the 2008 Junior World Championships in mountain biking as well as getting second in a few cyclocross competitions. So then he can do tricks like this:

Sagan doesn’t play the conventional card. He takes a race an etage at a time and gives it his all, even if that means going all out on a long race when the other sprinters are taking it easy. Sometimes that means racing downhill at breakneck speeds. Sometimes that spontaneity comes out by giving his girlfriend a kiss while racing, throwing his helmet to the crowd, or (due to reason 6) doing a bunny hop mid race.

4. He made a mistake in public

A couple years ago his joking on the podium went too far and he pinched one of the podium girl’s derriere. The media, of course, had a hayday. While the action wasn’t good, I think the consequence was. Seeing his more mature behaviour this year, that incident may have been an occasion that he grew from, learning humility instead of arrogance.

3. He speaks broken English in public

As native English speakers, we don’t really think much about the effort people of other countries make to speak English. Only once we start to learn another language do we realize how hard it can be. To speak a language you aren’t fluent in on live TV takes courage because you can’t express yourself as you would like.

Sagan is often seen joking around and having fun, from pulling wheelies to making jokes during an interview to photobombing another rider’s interview to spraying imaginary champagne with his trophy. It’s nice to smile.

1. And yet he’s not shallow

At the World Championship, he stayed around the finish line giving the incoming riders high fives and on the podium he purposely talked about the refugee situation in Europe. Afterwards in press conferences in Slovakia he spoke a number of times of how young people especially are so involved with the virtual world on their phones that they ignore and miss out on the personal experience of those around them. I hope that those who are excited by his prowess on the race course are equally inspired to think deeply about these issues.

Naomi blogs about the culture, food, and life in Slovakia atAlmost Bananas.