Honeywell plans to hire another 130 people

US COMPANY Honeywell, located in the Záborské industrial park near Prešov, wants to nearly double its production and create over 130 jobs in the process by 2019. 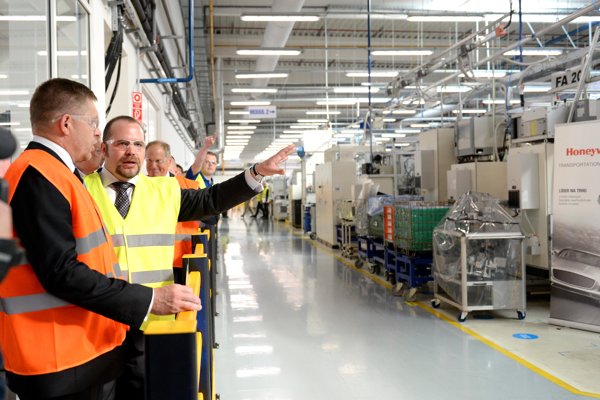 The producer of automotive turbochargers is now poised to vie for state aid worth €4 million after it received €19.1 million to set up shop in 2012. The plant currently employs 430 staff in three shifts, the TASR newswire reported.

Under the new project, the area covered by the plant is to be increased from 7,448 to 13,530 square metres, which would turn the facility into Honeywell’s second largest turbocharger production plant in the world. The company’s offer is unmatched on the market, said Honeywell CEO David M. Cote. More than 50 percent of all of the company’s activities relate to improving fuel efficiency in cars. More than 50 percent of the company's entire technology portfolio is designed to improve energy efficiency.  The turbochargers are able to reduce fuel consumption by 20-40 percent, which contributes to making the world a cleaner place.

Slovak PM Robert Fico praised the fact that the company’s further development proves that the decision to provide assistance to the company was correct. At the same time, the aid constituted support for an engineering concern that utilises cutting-edge technologies and provides jobs to highly qualified people.

“I’m personally pleased at the company’s plans to increase staff numbers from 430 by another 130 at some point,” Fico said, as quoted by TASR. “This is a region with higher-than-average unemployment ... I’ve also enquired about the company’s links with secondary vocational schools and universities, because whoever wants to get a job in the plant needs to be highly qualified, be it secondary school or university.”

The government has yet to receive an official request for state assistance towards the expansion of production at the Honeywell plant, the PM added. However, a request for €4 million is in the making, but it first needs to make it through inter-ministerial proceedings before being tabled at a government session. At any rate, the government has no misgivings about allocating aid to projects that have proven as exemplary as Honeywell’s, said Fico, as reported by TASR.