What do we fear most?

If we do not quell fear, it will befriend anger and eradicate our world. 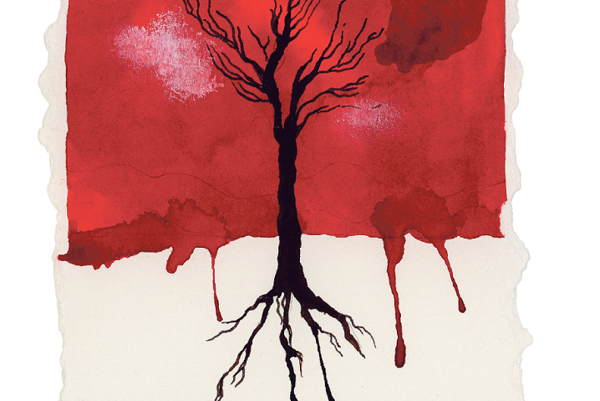 We carry fear inside us from the day we are born. Children's small bodies can sometimes hardly contain it. The fear matures along with us. It is not necessarily our enemy. It only waits for us to quell it so that it can serve us. If we fail to tame it, it can become our master..

We fear pain that penetrates deeply in our bones, and the humiliation that opens wounds on the soul. We are scared of being powerless, feeble, and lonely without end. And of death. Not just ours. Regardless of the prayers our parents whispered, these fears are shared across religions and cultures.

Sometimes people inherit their fear and then they get over it, like childhood measles. For those who fail to do so, fear grows through them like the roots of a 100 year-old tree, and determines whether they will walk through life upright, or hunched over.

Our fear can be small and easily dispersed by talking to a friend. It can also be blinding when it blocks us from hearing other points of view, and this kind of fear deprives us of friends. Sometimes, fear is paralysing. It lays so heavily on our chest that we can hardly breath, so we refuse to look it straight in the eye. It might be a real threat, but it can also be a shadow of a bristled kitten behind a curtain. Fear is sometimes fast to teach us things. But other times we need to study it for a long time, like a scientist studying samples of a virus. If we fail to tame our fear, it befriends our anger and eradicates our world. Such a world seems an even more hostile and deserted place.

Terézia lived in the past century in a small village near today's Slovak-Hungarian border. People found it hard to comprehend how can such a tiny body could contain so much anger, and that a lady in her 70s could disseminate it all day long. For people who did wrong – according to her – she demanded a heavy dose of God’s punishment and hellish sufferings. And her world was full of people who deserved these punishments.

She was angry with those who did not pray, with women who wore make up. She was afraid of them; she used to say that someone who does not pray is apt to make other mischief, too.

She was afraid of Slovaks, Russians and Romanians. She thought that one day, someone will come, speaking a language she does not understand, and take the garden with old apple trees from her – just like communists did after the war.

Slowly and gradually, she left people out of her world until only her ill husband, whom she nursed, remained in it. For villagers, it was quite easy to protect themselves from her anger: they walked faster past her gate so that they need not talk to her.

Terézia had no telephone, no computer, no e-mail account, no profile on social networks. She did not even have a TV set. In her fears, she was isolated, and her fears were rooted in her memories and stories that villagers kept recounting. She could not spread her frustration without limit, and hardly anyone could have helped her tame her fear.

By the end of 1970s, a myth was widespread in the central-Slovak town of Lučenec, claiming that the Jehovah’s Witnesses were taking children away and drawing their blood. It was late autumn. People were supposed to stay away from the cemetery and parents should not allow their children to return home from school unattended. No child from our school disappeared at that time and we knew basically nothing about Jehovah’s Witnesses.

But this was not important for the stories that had changed the darkness behind windows into hostile material.

Stories of strangers who bled people’s veins or kidnapped children surfaced when my parents were coming of age. Those strangers were faceless and nameless, kind of modern-era vampires who came from a distant lands and lived in shadows. Newspapers did not write about them and I know no-one who would actually meet them, but I can still remember the strange fear that depressed child’s soul after dusk.

Dávid, in his 40s, lives in a small Slovak town where time usually flows peacefully. But not for him. He is sure that in Europe, there is already war which arrived with thousands of refugees. Beyond Slovakia’s border, he sees young men, Islamists, who allegedly state aggressively that they want to “change the impotent Europe to to their image”. Dávid claims that if he is forced to, he would even procure a gun because “they” allegedly “listen only to the voice of power”, and consider everything else weakness. He claims that it is no coincidence that “these people come to Europe just now”. He fears also those who try to convince him that he is wrong – and warns that when they realise that he had been right all along, it will be too late.

Mária is a young woman from the town of Šamorín, and she, too, is afraid that the arrival of refugees is a part of some larger scheme. She claims that by coming here, Muslims are only finishing something that has started centuries ago, and she cites fights with Ottomans which she once learned about at school. “History will probably be repeated.”

Ján, in his 30s, has a child born a few months ago, and his life now revolves around his family. He is a firm believer and a proponent of the idea that you shall love your neighbour as yourself. Despite that, he does not want refugees in Slovakia. He does not wish them any ill will, does not want their ships to drown, he is not happy about their suffering. He simply does not want them to settle in the country he lives in. He fears that they will harm his family, injure his baby and rape his wife. He says she is pretty and adds that in their culture, it is normal to hurt women. His fear is driven by the internet where he sees “crowds of armed migrants fighting in camps”.

Kristína is a traveller and she knows how it feels to be a stranger. Even at home. She does not fear refugees; rather, she fears how Slovakia will manage all this, when a diverse country becomes a reality we are not used to. She fears the tension growing in society. She has the feeling that violent acts are increasing dramatically. Even now, she has not recovered from the Charlie Hebdo attack, and she is frightened by the idea that someone just raids someone else's apartment and shoots everyone.

Omar fears the Slovaks’ fear of strangers. To such an extent, that he even did not consent with his true first name to be published, nor the country he came to Slovakia from five years ago. So far, he has not had serious troubles in Slovakia. Since this summer, however, he has had a problem to find a flat to rent. As soon as he introduces himself on the phone, he is told that the flat has already been rented.

Rahil, a 26-year-old whom a reporter of the Sme daily met at the Serbian-Hungarian border a few metres from the barbed wire fence, feared that the fence might be the end of his journey. He’s running from war.

“The al-Nusra Front, Assad, Islamic State. It’s all the same. We’re running from all of them,” said Rahil, who wants to meet his family in Germany. He is running from Syria, a country where in the past four and a half years the armed conflict claimed nearly 250,000 victims.

He is one of the many who are driven by fear of death, not just their own death. The fear of pain that goes to the bone, and the humiliation that opens the wounds of the soul.

Sometimes fear is tailor-made for an individual. Then there is fear that seizes the masses and it mainly suits politicians. Such fear rarely turns a country into a better place. It breeds anger and frustration. A stream of malice flows through the digestive tract of the internet, spattering even those who feel no anger.

Collective fear can be tamed only if we learn to ask the right questions. If we fail to do so, politicians will serve us answers to questions that we haven’t even formulated. They will do so in a way that they are strengthening our feeling of security. But how could a person feel secure in a country where collective fear is active like a time bomb?

Nobody is just a passive listener to a story that breeds fear. Crisis situations and hard times can bring out the best in people. Or the opposite.