SLOVAKIA could accept several hundreds, or even thousands of people fleeing war and violence, President Andrej Kiska said in parliament on October 7. 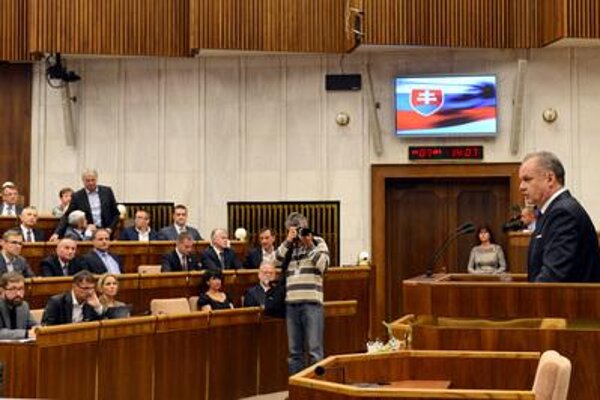 “I think this could be acceptable even for most our citizens, if we explained such a decision in a peaceful, precise manner and jointly,” he said, as quoted by the Sme daily. “It would mean no threat for Slovakia, and it would have no impact on a better or worse life for people in Slovakia.”

So far, Slovakia has never been directly, or seriously, tested in a similar way to some other European countries, including our neighbours, Hungary and Austria, or our most important economic partner Germany, Kiska added. He opines that the tone of public debate evokes fear of the refugees.

The President had asked for a speech in parliament for October 7 after he criticised Slovak top politicians at the weekend for not respecting the mandatory quotas for resettling refuges approved by the European Union and for abusing this issue in the election campaigning. Kiska has already made several speeches in parliament, most recently in June, when he spoke about the state of the republic. In November, he touched on problems in the education system and in health care.

Slovak foreign policy has misunderstood the humanitarian and sympathetic sense of the quotas, according to Kiska.

When Slovakia announced in July the acceptance of 100 people out of the total number of 40,000, we lost the affection of most of Europe, and also the understanding and comprehension of any sensible argument, the president said. Slovakia has become the subject of ridicule and mockery of the European and global media. “As if the humans got lost from the Slovak position – and the value of a human being,” he summed up, as cited by the daily. “Regardless of origin, nationality, religion, age, or social position of a person fleeing war, violence, and persecution.”

The second reason why the Slovak policy in Europe and the Slovak position lost the fight against the re-distribution of 120,000 refugees was the misinterpretation of the second meaning of the so-called quotas – the mutual solidarity among our European countries, in the time of probably the gravest crisis since the EU came to exist, he explained.