FOR the first time in Slovak history the majority of citizens have indicated that they support "life partnerships" which would be officially approved by the state for people who cannot or do not want to marry.

“It seems that the majority of the public is already convinced,” said Martin Macko of the Otherness Initiative supporting LGBTI rights in a press release. “This applies to supporters of the vast majority of political parties.” 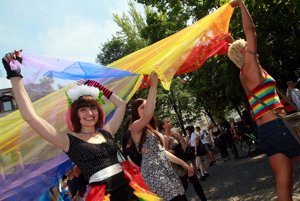 The survey was conducted by the Focus polling agency on 1,017 respondents in August, 2015. The question was: “Do you agree that couples who don’t want to or cannot be married could have the possibility of having a life partnership approved by the state which would regulate the practical questions of their coexistence (particularly their shared rights and responsibilities) as several other European countries offer,” with 50.4 percent of respondents saying yes.

The survey was ordered by the Life Partnership Platform consisting of 39 NGOs who promote this idea.