THE ARTIST Pinggera made a series of paintings of old Bratislava beginning in the 20th century, several of which were published also as period postcards. Pinggera managed to discover the magic of the city’s coves and recesses – which can be seen in this picture. 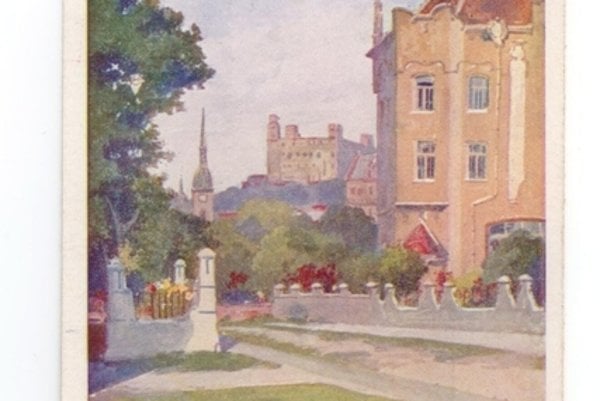 The painter must have stood close to today’s Šafárikovo Square. From there, he captured the two most dominant markers of Bratislava: St Martin’s Cathedral and the castle, the silhouette of which was then still marked by the devastating fire of 1811.

The look of the Bratislava Castle has changed several times in the course of the centuries. One of its oldest portraits dates back to the 14th century. It is a part of the Vienna pictorial chronicle and, apart from the castle’s appearance, it also captures an interesting event. In 1052, German Emperor Henrich III lay siege to the castle for whole eight weeks. Ships anchored on the Danube cannonading at the city defenders posed a huge danger. When the situation seemed already lost, one Bratislava fisherman came and offered to swim at night to enemy ships and bore holes in them. He managed to do so, thus the ships sank and the city was saved.

It is interesting to note that the men in charge of Bratislava defence had to search long for someone who could swim well. A good swimmer was probably a rarity then.