Who would I be, if there was no food in the shops and no electricity in the wires? If my flat is turned into a ruin and I stand alone in the middle of nowhere? The Alatyr Theatre from Warsaw will give answers to even more questions about our identity and humanity at the festival of English speaking theatre Bridgin'V4. 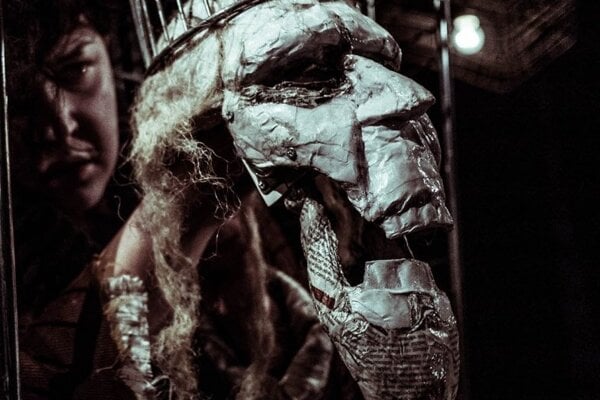 Bridgin'V4 will host theatre groups from the Visegrad group countries - Slovakia, the Czech republic, Poland and Hungary along with special guest from Austria. It will be held on the 15th and 16th of October in the Culture Centre in Pezinok.

In this blog we will gradually introduce all five theatre productions to be offered at the festival. The fourth is a theatre from Poland.

Two people are hidden in the ruined shelter. They have neither supplies, nor ideas nor hope. Waiting for the end, they are recalling their past with the people they’ve met. More characters enter the stage in the form of creepy dead puppets.

The performance We've run out of days is based on the fragments of William Shakespeare’s King Lear, Samuel Beckett’s Endgame, Cormack McCarthy’s The Road, Kurt Vonnegut’s Cat’s cradle, Thomas Eliot’s The waste land and The Book of Revelation.

This Polish theatre piece can be seen at the festival Bridgin'V4 on Thursday 16th of October 2015 at 9:00 AM, in the Culture centre Pezinok (Pezinské kultúrne centrum), Holubyho 42. The festival is organised with support from the Visegrad fund. More information at www.anglickedivadlo.sk.