SLOVAK Prime Minister Robert Fico signed an agreement in Havana on October 9, according to which Cuba should settle its debt towards Slovakia. It was the main point of a meeting with Cuban Vice-president Ricardo Cabrisas Ruiz, whileSlovakia is the only country in central Europe to have achieved this so far, according to the government. 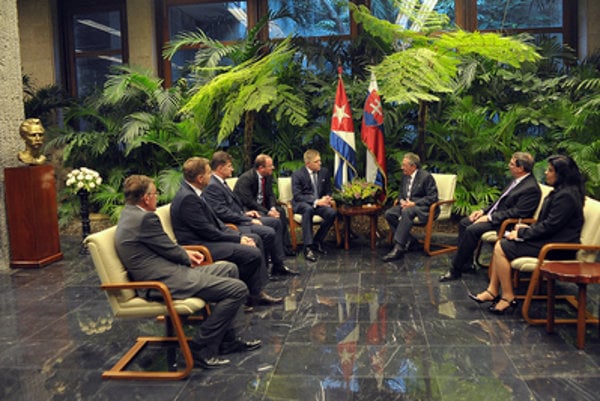 However, no specific amount of the debt has been specified; but according to calculations stemming from the rate at which the debt was divided after Czechoslovakia split, and according to the amount of Czech debt, it could be somewhere around €130 million, the Pravda daily wrote.

The meeting also saw agreements signed between Cuban energy company Energioimport and Slovak firms SES Tlmače and Eximbanka on carrying out energy projects worth a total of up to €100 million, the Slovak Government Office informed the TASR newswire.

Cuban representatives presented their ambitions for renewable energy, indicating that there is room for Slovak companies to participate in energy projects in the country. They showed the Slovak delegation – Including Foreign and European Affairs Minister Miroslav Lajčák and Finance Minister Peter Kažimír – the Mariel special economic zone which offers favourable conditions for foreign investors, and the Centre of Genetic Engineering and Biotechnology which is known for producing quality pharmaceuticals.

Cabrisas Ruiz also told the Slovaks about changes currently going on in Cuba that have led to increased openness to the world and the gradual creation of a private sector. He also accepted Fico’s invitation to come to Slovakia.“ The changes must be gradual and well prepared,” Fico said, as quoted by the Sme daily, after the meeting with Cuban cardinal Jaime Lucas Ortega y Alamino.

The highlight of the Slovak trip to Cuba was the meeting with President Raul Castro on October 9, with the Cuban leader praising the signing of economic agreements between his country and Slovakia. The top Cuban official also expressed interest in Slovakia’s transformation process.

This visit by the Slovak delegation is the historically first since independent Slovakia came into being, Pravda wrote.