PRIME MINISTER Robert Fico’s cabinet has sent the most important law of the year, the draft budget of the general government for the next three years, to parliament. 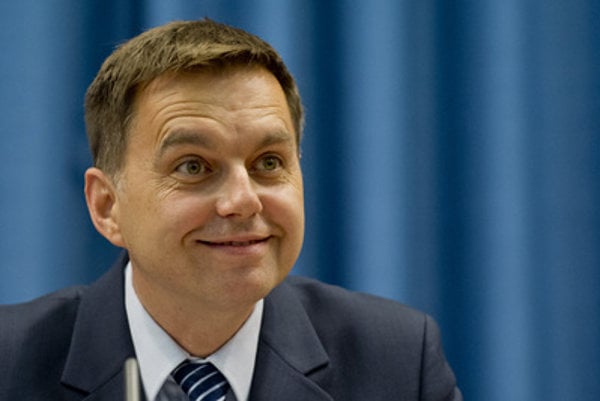 The plan is ambitious, with continuing consolidation of public finances moving toward a balanced budget in 2018.

The government wants the budget adopted by the end of November and, as Fico’s Smer party holds an outright majority in parliament, it is expected to easily pass.

“We are handing down the country [to the next government] in a significantly better condition in economic and financial terms than what we took over from the rightist government [in 2012],” Fico said.

“Everything in the numbers is achievable,” Finance Minister Peter Kažimír said after the cabinet passed the draft on October 7. “Actually the scope of consolidation is half compared with the years 2011 or 2013.”

Kažimír described the GDP growth estimate for 2016 as conservative while noting that Slovakia’s economy is doing well despite problems in the global economy.

“Domestic demand has again become, after long years of the crisis, a key driving force in our economy,” said Kažimír. “I’m not only speaking about our households but also private investments, income of foreign investments…”

The budget for 2016 already includes costs of measures from the so-called second social package that reduces the value added tax (VAT) on selected foodstuffs, natural gas refunds for households and support of underdeveloped regions. The cabinet also proposes to increase wages of about 350,000 employees in the public sector by 4 percent.

The budget for 2016 contains also a reserve of €20 million for mitigating the migration crisis, €50 million will be put aside for settling debts of medical facilities and almost €76 million is put aside for important investments.

The draft budget for 2016 also reflects the end of the current period for drawing EU funds in 2015 while drawing new funds is expected to be gradual, officials said. This reflects, for example, the significant decrease in the budget of the Environment Ministry, which will have 80 percent less than this year.

Views of economists  and the opposition

Some economists noted that even though the plan to push down the general government’s deficit to 1.93 percent of GDP is ambitious, the government will fail to meet the projected 2.49 percent in 2015, with the latest estimate being 2.74 percent.

They also have pointed to risks to Slovakia’s budget from the migration crisis, the Greek debt crisis and deceleration of the Chinese economic growth.

“It is based on the fact that the public administration will have an excess, but this might not be fulfilled,” Ďurana told the Hospodárske Noviny daily.

Katarína Muchová, analyst at Slovenská Sporiteľňa, sees the budget as generally realistic and based on the latest macroeconomic and tax prognoses.

“Even though the budget for following years meets conditions of the EU, it might have been a bit more ambitious,” Muchová wrote in her memo, adding that risks include especially macro-economic factors like a possible deceleration of growth in Slovakia’s trade partners, especially Germany, and future developments in the eurozone.

The perception of opposition politicians is mixed.

While Most-Híd supports the plan for Slovakia to achieve a balanced budget within two years and reduction of total debt below 50 percent, it sees the current fight against unemployment as insufficient.

The Christian Democratic Movement (KDH) is more critical, seeing the draft budget as manipulation of poorer voters prior to the elections. The party stated that first the government makes people socially weaker via high income and payroll taxes and then wins them back with a few euros before voting season.

Miloš Moravčík, vice-chairman of the KDH, used as proof the steep increase in the tax burden which will increase by €1.2 billion in 2015 and by an additional €700 million in 2016, arguing that most of this comes from the incomes of companies as well as ordinary people.

“It is as if you first took a car from somebody and then offered him a free ride one time per week,” stated Moravčík, as quoted by TASR. “The budget reveals that the cabinet is doing something similar with people. It is unfair and does not have anything in common with social policy.”