Canadian author recounts parents' experience with the Holocaust in Slovakia

THOUGH she was born in Toronto, Kathy Kacer regularly returns to Slovakia -- the place where her parents survived the Holocaust. Much more than that though, Kacer has turned their  life stories into a series of books for children and taken to traveling the world debate the topics with young readers. 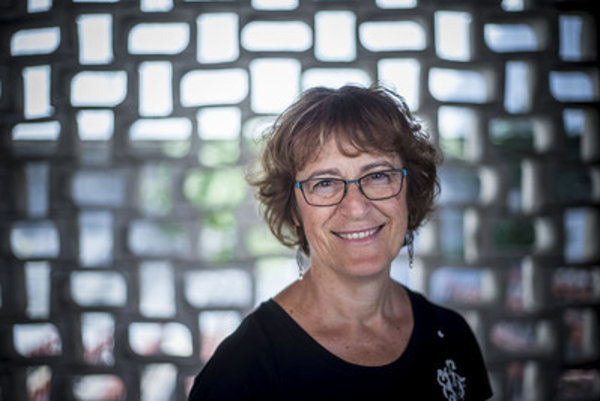 The story of her mother began, Kacer told the daily Sme , when Slovak units of Hlinka’s (Nazi) Guards started to occupy her home village, Ološnica. Jews were being separated from non-Jews, and it was just a matter of time when they would come and search also the house of her grandparents. After Jewish girls had been assembled in a settlement near the town of Levoča, her mother, then aged 13, started spending ever more time (first only a few moments) locked in their cupboard in the dining room – to adapt to spending as long as possible in the confined space. Eventually, she really had to hide there, and was locked inside when her house was raided. Kacer's grandmother clutched the key so strongly that her palm was bleeding when the raid ended.

Kacer says that she has grown up listening to such stories from her parents, eager to learn more and more. “They were great narrators,” she says. “I don’t ever remember not getting an answer to any of my questions from then; they were able to talk about history in such a way that it was not too scary for me.“

Their way of telling the wartime stories was probably an example for writing gentle and carefully, to address child readers and she holds discussions with children aged between 10 to 18 years old. When they start talking, she usually finds out that the youths already know some facts about the history; but they are most enthused about her speaking to them about her factual life stories, not fiction. In this way, the history gets to them; in a way different than at school.

“From this point of view, I do not care at all where in the world am I right now, as children are similarly curious everywhere,” she noted.

In Slovakia, reactions were fantastic; as children were very curious, according to Kacer. She adds that she has not met any major negative opinions, though one girl, aged 18, who said that her grandmother, a German, did not do anything bad during the war but was persecuted later nevertheless.

"Of course, the issue appeared in context to place her story,” Kacer said. “I told her that her grandma’s story was very important; there are not just Jewish stories in connection with the war – the image is composed of many various angles. I told her I understand fully what she was talking about: None of us can tell how they would behave in such a moment. If there were only bad and good people, everything would be simple and we would always know what to do.”

Another young student once asked her whether it is really necessary to judge and try old people – she has started to write a book about the trial of one of the last surviving war criminals, a man aged 94. Kacer’s answer was that she thought it was necessary, as people must be held responsible for their deeds, and countries must be responsible towards the world. She also pointed to the dark sides of Canadian history; when the country did not behave well towards Jewish refugees, and closed its border totally.

“When they were later opened, our family welcomed immigrants, too – directly in our home. Today, we like the status of a free country, but we must always remember our past,” Kacer said.

She visited Slovakia for the first time in 1998; before she started to write books for children. Along with a cousin, Kacer visited her parent's native villages.

“Today, your country seems bigger and busier to me,” she said. “These are strong feelings, to return with books on Holocaust to the country where my parents were unwanted citizens – maybe they are turning in their grave.”

A student asked her about the cupboard and the key. After the end of war, someone else was living in their house; but Kacer’s grandma was determined to take at least the cupboard – and she managed, somehow, transported it across half of the world, first to Israel and then to Canada where it stood in the dining room for the rest of her life. Later, Kacer’s mother inherited it. Now she owns it, though the key has been lost in the meantime.

"It is just as well," Kacer said. "I don’t want to have to lock somebody in it again.”