ON SLOVAK Facebook, a false competition to win one of 500 Volkswagen Jetta cars has appeared but the official Volkswagen Slovakia website has no link to Facebook. 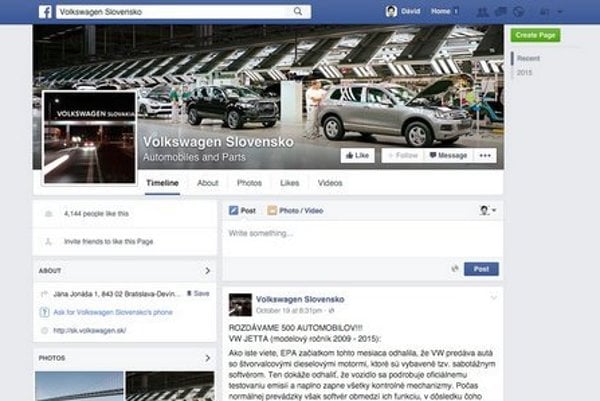 The report describes, quite plausibly, the situation around the carmaker’s scandal concerning the faked results of emissions tests; and it concludes that the market for which 500 Volkswagen Jettas were made does not want them due to this flaw, so the manufacturer decided that instead of dismantling and costly and elimination of them, that they would distribute them among people. To participate in the competition, Facebook users were asked to click a Like, comment on the competition and share it on their profile, Sme.sk website of the Sme daily wrote on October 21. Finally, the 500 winners were to be drawn on November 10. More then 10,000 people reacted to the call.

“This information is misleading,” spokesman of the Slovak branch of Volkswagen, Vladimír Machalík, told Sme.

Apart from Facebook, Aktuálne.sk website also wrote seriously about the competition, Omediach.com blog wrote on the same day. First information was totally misleading, while later, words like “allegedly” were added to the report and alter it was totally re-worded; but the online news portal never admitted publishing untrue information and never apologised for it, Omediach.com, the watchdog on Slovak media, commented.

Some other Slovak media, on the other hand, drew attention to the hoax by warning against it.