Pride of the Great Hungary

THIS postcard was sent from Liptovský Hrádok in 1900. The publisher, Edgar Schmidt, chose this view, although the town in central-northern Slovakia offers much more picturesque and interesting scenery. 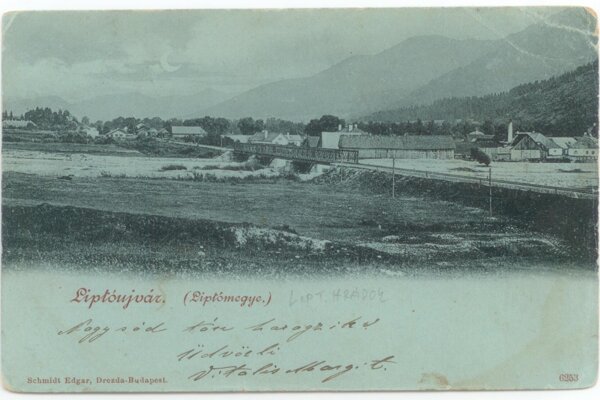 And it was not storehouses or meadows that stretched around them. The attraction of the postcard was meant to be the railway bridge and track of the Košice – Bohumín railway itself, the pride of the country.

The construction of the track began in 1869 and, when finished, connected the eastern part of Great Hungary with Czech lands. The railway started in Košice, led across northern Slovakia, and continued to Bohemia where it ended in Bohumín.

Building a railway in the northern part of Great Hungary – today’s Slovakia – was inevitable, and this reflected the position of this part of the country within the monarchy. Apart from Budapest, the most industrialised part was Slovakia. Old manufactures were re-built into new factories, and many new plants were also construed.

The Košice – Bohumín railway was initially built as a one-line track, and only re-made into a two-line track at the break of the 19th and 20th century. Steam engines then pulled trains, although railway transportation a hundred years ago was not much slower than it is today. For example, the section between Žilina and Poprad was shorter than three hours, while now it is two hours.

Another interesting point of this postcard is the moon shining above the mountains. Its image and bluish colour should evoke the impression of night. However, this is more of a popular period collage than reality.