THE RECENT food scandal which involved a company whose image has been harmed after being suspected of food contamination which later proved to be wrong should change the system of reporting about such cases. 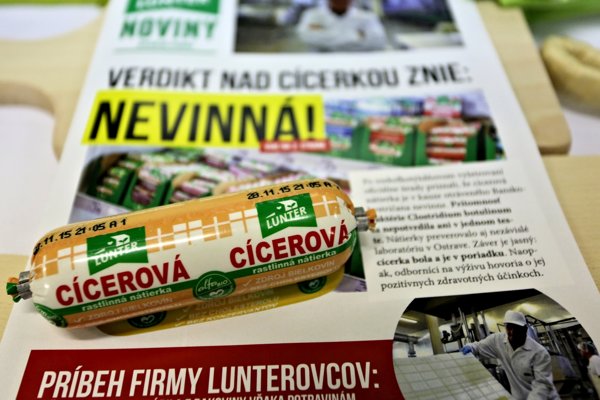 Back in August, company Alfa Bio, which now runs under the name Lunter, made headlines, after the regional public health authority claimed its chickpea spread was contaminated with the botulinum toxin. This followed the hospitalisation of a 43-year-old man from Banská Bystrica. Experts from the regional public health authority in Banská Bystrica opined that he might suffer from botulism, caused by the toxin present in the spread. Though the tests did not confirm the presence of the dangerous toxin, the image of the company has been damaged.

“It is very important to start the discussion among experts who understand the process, the public administration bodies which are responsible for observing this process, and the companies, producers, sellers and suppliers in order to prevent similar cases from repeating in the future,” President Andrej Kiska said after meeting with Lunter representatives in mid-October, as quoted by the TASR newswire.

The need to open discussion about the controlling process has been stressed also by one of the company’s owners Ondrej Lunter who said that this case opened the question of communicating potential information, stressing that they want the whole process to be transparent, the Sme daily reported on its website.

Following the announcement of the regional health care authority, the spread was withdrawn from shops in the Czech Republic and Slovakia, and the company has seen its sales drop by 30 percent in Slovakia and 50 percent in the Czech Republic. It even had to dismiss some of its employees, mostly those working on temporary agreement. Company representatives however stated that they do not consider filing a lawsuit to protect its name for now, TASR wrote.

Meanwhile, thousands of people have expressed their support for Lunter on social networks. One Bratislava-based café even started offering the chickpea spread with two slices of bread.

It will, however, take time to restore the harmed image of the brand, said Ľubomír Drahovský, an analyst with the Terno market research agency.

“The situation follows the mistake of the state control bodies and not even public support can replace the spoiled image,” Drahovský told the Hospodárske Noviny daily.

The state bodies do not create good relations between food producers and retailers. The state should approach every case carefully and distinguish what the real threat is, Drahovský added.