WHEN teachers marched in the streets asking for higher wages and more finances to the education sector in late 2012, they returned to their classrooms with the government’s promise to hike their salaries by 5 percent. 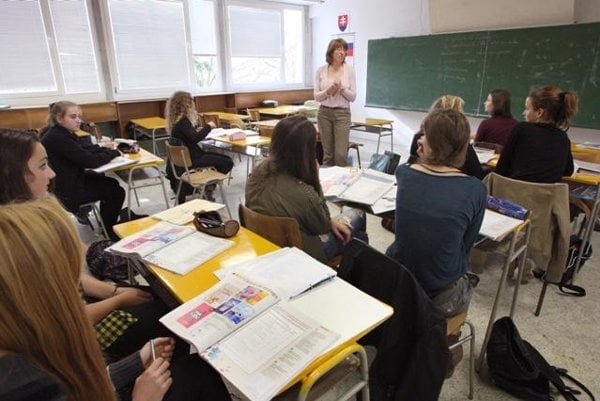 Three years later even this promise has only partially materialised, resulting in the growing dissatisfaction of teachers’ representatives. However, it is unlikely the teachers will strike again.

The Slovak Chamber of Teachers (SKU) called on the government in mid-October to secure the hike of tariff salaries of all teachers and professional employees in the school system by €140 as of early 2016, and another €90 as of 2017. They also demand increasing the Education Ministry budget by €400 million, and restoring the credit system which allowed teachers to increase their wages via various bonuses.

The call followed the proposal to increase teachers’ salaries by only 4 percent next year. The Education Ministry, however, considers it unrealistic.

“You cannot propose to increase the state budget, which is in fact prepared, by €0.5 billion,” Education Minister Juraj Draxler said in the political talk show O 5 Minút 12 (Five to Twelve), broadcast by the public-service RTVS. 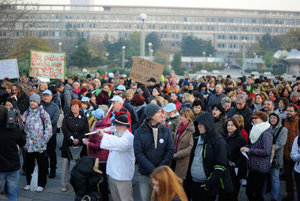 The SKU claims they are only repeating the earlier requirements of teachers.

Though Draxler agrees that the school system needs more money, the SKU call was badly timed as it came only after the collective negotiations on salaries had ended, said Education Ministry spokesperson Beáta Dupaľová Ksenzsighová.

Peter Goliaš of the Institute for Economic and Social Reforms (INEKO) think tank, however, says that since the economic situation of Slovakia is in good condition “there is room for a more significant increase”, as reported by the Sme daily.

Though the proposed growth is lower than in previous years, the fact remains that the salaries of teachers have been rising quicker than in other professions. Between 2009 and 2014 the average annual salary hike of teachers and non-teaching employees rose by 4.6 percent, while the average wage in the national economy grew by only 2.9 percent a year, Dupaľová Ksenzsighová told The Slovak Spectator.

Moreover, the 4-percent hike came as a compromise as other state administration employees will see their wages increase at the same rate, explained Pavel Ondek, head of the school trade unions. The originally proposed 5 percent would concern only about 87,000 teachers, but not non-teaching or university employees.

“Thus as an expression of solidarity with other non-producing unions active within the confederation we accepted 4 percent,” Ondek told RTVS. Nevertheless, he admitted they do not consider it enough.

SKU, however, says they had not been invited to the collective negotiations, nor had they been asked about their opinion.

“Moreover, the collective agreement has not been signed, nor has the state budget been approved,” reads the statement.

Yet salaries are not the only problem in the education sector.

“During the past three years the status of teachers worsened significantly from the point of their rights and possibilities to obtain credits,” the SKU claimed in the statement.

Moreover, the government failed to prepare the strategy for development of the school system, has not fulfilled its promises and has not adopted measures to stop the worsening results of Slovak pupils in international testing, the SKU continued.

Meanwhile, the Initiative of Bratislava Teachers launched a petition to support the requirements of the SKU. Moreover, it is organising a gathering of teachers in front of the Government’s Office on November 5, titled “The Rally of Long Noses”.

The name indicates that the teachers have been jerked around and that the draft state budget came as an unpleasant surprise not only to schools, but also to parents and their children “who will lack basic teaching aids and equipment in their classrooms”, Mária Barancová, head of the SKU, told The Slovak Spectator.

The SKU, however, does not expect that the strike from 2012 will be repeated.

“We believe that there will be no need to organise further protest actions, that the situation will calm down, trust will be restored, and we will be able to continue in our work and mission,” Barancová said.

The SKU will, however, join more campaigns to win the support of professionals and laymen if necessary. It currently participates in a grassroots campaign which points to the critical state of education in Slovakia and whose aim is to make politicians increase education funding and initiate fundamental changes in the sector, Barancová added.

Despite the Education Ministry’s claims, the data of the Organisation for Economic Cooperation and Development (OECD) suggest that Slovakia lags behind other countries when it comes to salaries for teachers compared to the salaries of other professions where university education is required, said Lucia Kováčová of the Slovak Governance Institute (SGI).

To remove this gap, Slovakia would have to invest some €0.5 billion, according to an analysis which the Financial Policy Institute prepared for INEKO last year. They used the data from the Statistics Office based on which the teachers’ salaries comprise some 60 percent of the average which university educated people earn, Goliaš explained to Sme.

Though some kind of sudden increase in teachers’ salaries will not immediately increase the quality of education in Slovakia, the monthly earnings of teachers significantly impact the decision of young people to choose this job, Kováčová said.

“In other words, low salary of teachers and deteriorating social status of teachers’ job in the long-term horizon causes that ‘low-quality’ people, who were not accepted to study more financially and socially prestigious programmes, start study teaching subjects,” Kováčová told The Slovak Spectator.

However, it is important to say that the salaries are not the only way to increase the interest of young people in becoming teachers, she added.

Goliaš identifies several sources to cover the increase in teachers’ salaries. One of them is to utilise the money collected from taxes. This would, however, mean giving up some measures which are part of the so-called social packages. Another way is to cut expenses in some sectors, like the subsidies to energy production from brown coal, or not reducing the VAT on basic food.

He also sees room for some savings in the education sector. Since the number of pupils will be decreasing in the coming years, there is no need to have so many schools as today. Moreover, the number of schools with only a small number of classrooms is also high.

“It is not effective to run such schools and we can replace them with, for example, school buses or other types of transport which would drive children to bigger schools,” Goliaš told Sme, adding it is important not to close good schools though they have fewer pupils.

Kováčová of SGI adds that if education is one of the priorities, it should have a priority status when redistributing the finances. The fact that the government still postpones this decision has and will have “very negative impact on quality of our education system and the whole education level, and subsequently the employment and economic prosperity of the country”.

Also Goliaš considers it important to make education a priority, so teachers will be motivated to stay there, as reported by Sme.