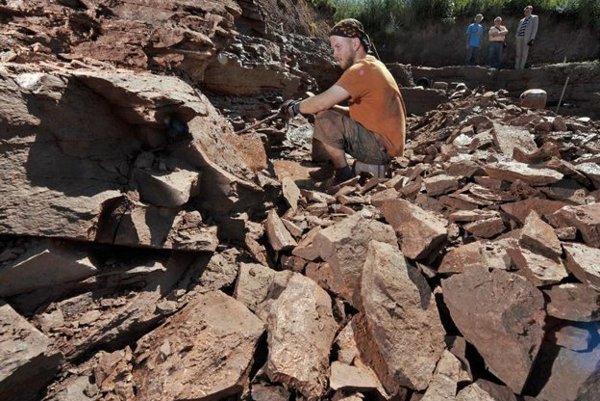 The “Island Rule” on size claims that if big animals arrive to live on an island – e.g. elephants – they start shrinking towards miniature size, due to limited resources of food and limited habitat. On the contrary, smaller animals like lizards have no natural enemies in island habitats, and thus their body size could grow very quickly.

However, Čerňanský discovered and studied a fossil from the genus Gallotia which is found only on the Canary Islands. He named it Janosikia Ulmensis, after the Slovak national hero, outlaw Juraj Jánošík. According to information of the Zoological Journal of the Linnean Society magazine, the genus Gallotia has not been growing in size on the island – quite the contrary. The prehistoric lizards came to the island already big.

In an interview with the Sme daily, Čerňanský said that the name for the fossil stems from respect for Jánošík who “was more than just a bandit”: he was a positive personality of national history and also a symbol of a youthful rebellion. “When you live and work abroad for years – as I do, in my case in Germany – anything that reminds you of home is ever more precious,” the scientist explained.

Until now, the genus Gallotia was considered a clear example of the island gigantism; scientists supposed that a small lizard resembling the North African species Psammodromus colonised the Canary islands 20 to 18 million years ago. As it did not have any natural enemies, it supposedly gradually increased its body size several times. But the fossil record illustrating this theory was missing.

“Currently, we have been able to do research, for the first time, on fossils and almost complete findings from about 22 million years old which are in the line leading to the lizards from the Canary Islands. Our fossil comes from Germany and precedes the period of the islands’ colonisation. It also shows us a completely different story, proving that the evolution of body size is much more complex than we had originally thought,” Čerňanský explained.

This stems from a whole set of anatomic features – like the huge size, as the skull alone was almost five centimetres long, the Slovak researcher said. This shows that this line had already grown to this size on the continent before colonising the islands; some other current species from the islands, on the other hand, represent markedly smaller animals. Thus, Janosikia turned the original idea upside down.

The fossil is crucial for understanding the island rule of evolution of body size, and also the herbivory of today’s large species of lizards. It also confirms the assumption of molecular biologists that the line leading to the genus Gallotia has its origin on the European continent; and, last but not least, it is one of the best preserved lizards from the Tertiary that reveals many important, so far unknown aspects of the evolution of dominant group of reptiles in Europe – the family Lacertidae, Čerňanský summed up.