A WAVE of ribbon-cutting ceremonies and the opening of new highways has been an unambiguous signal that parliamentary elections are coming since the times of three-time PM Vladimír Mečiar, who even paid the German supermodel Claudia Schiffer to accompany him while opening a short stretch of highway back in 1998. 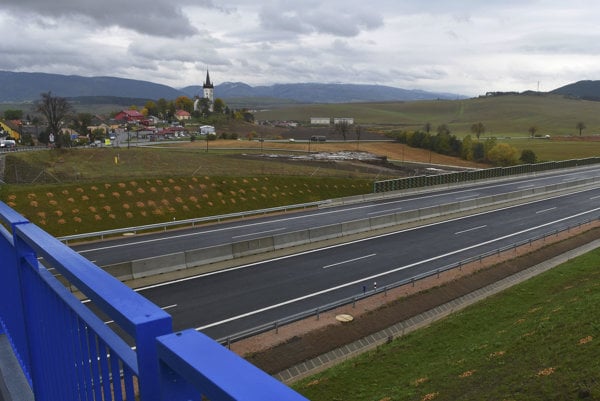 With the D1 cross country highway between Bratislava and Košice still incomplete, Prime Minister Robert Fico’s Smer-led government looks set to take up the tradition with plans to launch some 50 kilometres of highways and dual carriageways only in 2015. The opposition notes that many of these projects were launched before Fico took power.

Transport Minister Ján Počiatek opened a 9 kilometre stretch of the D1 between Spišský Štvrtok and Levoča (Prešov Region) on October 20. Váhostav-SK and companies Bögl and Krýsl that built the stretch in consortium completed the project some two years late, with delays caused by a collapsed bridge close to Kurimany in November 2012 that left four workers dead and 11 injured. Financial problems surrounding Váhostav-SK, which narrowly avoided bankruptcy earlier this year, also slowed work.

Construction costs of this first part of the Jánovce-Jablonov stretch were about €10 million over budget at €70 million.

“The reason behind the increase were unpredictable geological and hydrological conditions as well as legislative changes,” said National Highway Company spokeswoman Eva Žgravčáková, as cited by the SITA newswire.

Váhostav-SK lost about €8 million on the project. The consortium won the tender with a bid of €59.9 million, even as the state estimated the project would cost €95 million.

“The final loss will be known after all works are calculated,” Tomáš Halán, spokesman of Váhostav-SK, told SITA.

The case of the collapse of the bridge remains open with prosecutors.

“It is now up to the prosecutor’s office whether any charges will be filed and how the case will continue,” Počiatek said, as quoted by SITA, adding he hopes that the next steps will be announced in the coming weeks.

In the summer of this year Počiatek opened the 16.5 km Dubná Skala-Turany and by the end of 2015 the Transport Ministry plans to also open the 9.5 km second part of the Jánovce-Jablonov (from Levoča to Nemešany including the 590 m Šibenik tunnel built by Eurovia SK) and the 11.2 km section Fričovce-Svinia built by Doprastav and Strabag.

These projects are also late for their July and February deadlines, respectively. This would complete the highway stretch between Ružomberok and Prešov, bypassing Levoča. Drivers will save a total of 10 minutes in driving time.

All three stretches on the about 150-km Ružomberok-Prešov road have been built from EU funds and the state budget. They originally were to be built within the so-called first public-private partnership (PPP) project launched during the Robert Fico cabinet back in 2007. But after the Iveta Radičová cabinet took power, Ján Figeľ, who served as the transport minister between 2010 and 2012, scrapped the projects and divided the packages of several highway stretches into smaller projects. They, co-financed from the EU funds, were later tendered when the final prices were far below the original state estimates. Experts see behind the lower tendered prices bigger competition, longer construction times, lower number of highway projects under construction as well as the arriving crisis to which construction companies responded also with offering prices at the brink of or below real costs.

Now Christian Democratic Movement (KDH) chair, Figeľ says that Smer is opening these cheap highways as part of his pre-election campaign. He recalled back in 2010 Fico as an opposition critic claimed that Figeľ would never tender and build the highway for such a low price.

Počiatek responded that “it is necessary to realise that these highways come from the era of so-called glorified cheap highways which in fact did not prove to be the cheapest but more complicated since the then-government urged prices which were unrealistic”.

While some builders indicate that the highway projects are loss-making for them, this does not have any impact on the final prices.

Pavol Kajánek from the Transport Research Institute (VÚD) pointed out for the Sme daily that construction companies had offered in tenders prices for which they would build the highways and that they did so.

While some dozens of kilometres of new highways will be opened during the coming months, a complete D1 backbone 450-km highway connecting Bratislava and Košice remains far off. The 13.5 km Turany – Hubová portion of the route, because of environmental concerns, has not yet been set.

Slovakia also faces another huge challenge in highway construction as it plans to build a bypass around Bratislava to ease the traffic in the capital. But while there is a plan to build D4 highway Jarovce – Ivanka, north – Rača and R7 dual carriageway Prievoz – Ketelec – Dunajská Lužná – Holice totalling 59 kilometres via PPP, the concession for 30 years is estimated at €4.53 billion, and the think tank Economic and Social Reforms Institute (INEKO) warns that this project might be overpriced by €1 billion compared to a standard form of construction.