NO, it is not a revolution in classical music – or Slovak culture in general – but it is true that after some time the Slovak Philharmonic (SF) is undergoing a metamorphosis. 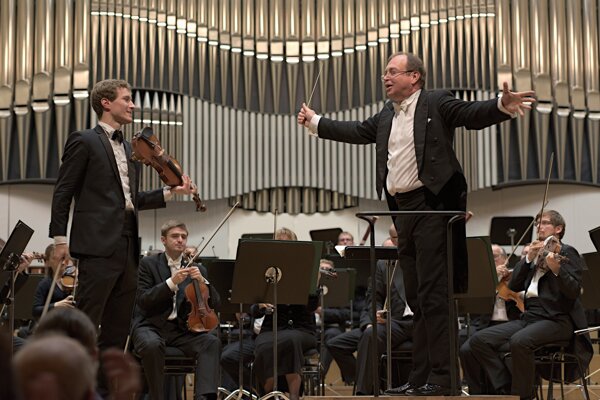 The chief conductor of the philharmonic, Frenchman Emanuel Villaume (who also has conducted the Dallas Opera and now will be chief conductor in Prague) is about to give his last show. As of the 2016/2017 season, he will only conduct a few concerts, and not function as chief conductor anymore. Instead, there will be permanent guest conductors (Leoš Svárovský or Rastislav Štúr, among others) until British conductor James Judd takes the helm in September 2017.

As for the venue, it will remain the same; for now. The Slovak presidency of the European Council, starting next year, will require some sacrifices; and one of them will be the use of SF headquarters, the historical Reduta building. Thus, this season will end slightly earlier, and in September, SF will play in the historical building of the Slovak National Theatre, just across the square.

Meanwhile new ventures include events for children and youth, be it as performers or audiences. The Philharmonic Kindergarten will strive to open the beauty of classical music in a playful form – first as a pilot project and then on a regular basis. Apart from the established cycle for families with children, there will be the special, less traditional concert of Classical Music Maniacs in February. The talented, selected students of the Bratislava Conservatory will be invited to play in regular concerts.

Another new project is the cycle of piano recitals (Tuesdays); piano soloists will also play with orchestras in regular concerts.

The biggest events this season celebrate anniversaries: those of composers (Slovaks Martin Burlas, Vladimír Bokes and Vladimír Godár), as well as musical ensembles. The Slovak Philharmonic Choir (Slovenský filharmonický zbor, SFZ) will celebrate its 70th anniversary in February 2016; while the Slovak Chamber Orchestra Bohdan Warchal, led now by Ewald Danel, will celebrate 55 years since its foundation by a special concert in January, commemorating its founder, Bohdan Warchal.

Many of the concerts of the Slovak Philhramonic are already streamed live. Starting this since some are available later in the SF archives (http://stream.filharmonia.sk).