Though the position is lacking in formal power, Andrej Kiska is a good president. 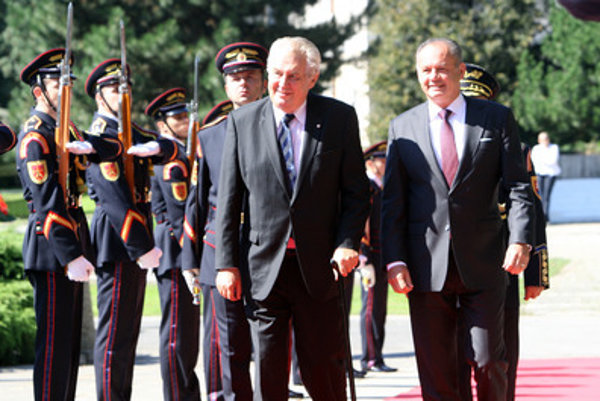 In the Slovak political system, where the opposition is largely ineffective at expressing real differences with the government, he provides subtle reminders that there are points of view beyond those of the ruling Smer party. He also does it without sparking an open confrontation with the government or overstepping his constitutional mandate.

Kiska makes something difficult look rather easy, but one need only look next door to the Czech Republic, and the embarrassment that is President Miloš Zeman, to see the opposite.

Last week, the weekly Respekt reported that the Czech state had to pay a £1,600 cleaning bill for a hotel room Zeman stayed in during last year’s NATO summit. The reason? He was smoking in a non-smoking room. The incident is a silly one, but it also accurately characterizes Zeman: he is unaware, thinks rules don’t apply to him and costs his country because of it.

Mr. Zeman’s choice for chancellor, Vrastislav Mynář, has been unable to gain a security clearance – for two years. Even Andrej Babiš, the Czech finance minister and billionaire, is worried about who Zeman chooses as allies. Earlier this month Babiš told me in an interview: “The big problem with the president is the people he surrounds himself with.”

In an interview with the tabloid Blesk this week, Zeman accused refugees approaching Europe of using children as human shields. He also, though apparently without seeing any contradiction, said the refugees are also simultaneously all males with iPhones, iPads and lots of money. Zeman went on to say that most refugees are not worthy of compassion. There may very well be reasonable disagreements about how to handle the existing the European refugee crisis, but it is hard to see how lies and an outright refusal to acknowledge other human beings contributes to this.

And that is sort of the point, Zeman has no desire to play a constructive role in public affairs. His primary goal is to let people know he is still around and relevant. In case you forgot he was a really important guy 15 years ago or so, he wants to remind you. Furthermore, he is entitled to the job he has –  Havel was president, Klaus was too, now it is his turn. If liberals are shocked that he smokes, drinks, insults people and associates with shady characters, too bad.

Democracy is meant to be about convincing people your ideas are better than the other persons. When one sees the way Kiska handles his presidential duties, it is tempting to think that the presidency might be worthy of a stronger constitutional role. Even a Smer supporter who disagrees with Kiska’s positions would have a hard time arguing that he does not add a plurality and freshness to political dialogue.

But when you look next door in the Czech Republic, you are glad that the role of the presidency is weak. Thank goodness the damage Mr. Zeman can do is limited to a room at the Radisson in Bristol, England.