Most-Híd is calling on the Christian Democrats (KDH) and Sieť parties to state what alternative to Smer government they have in mind and whether they are willing to participate in it together, said Most-Híd chairman Béla Bugár when asking for a coalition of this trio at a press conference on Monday. 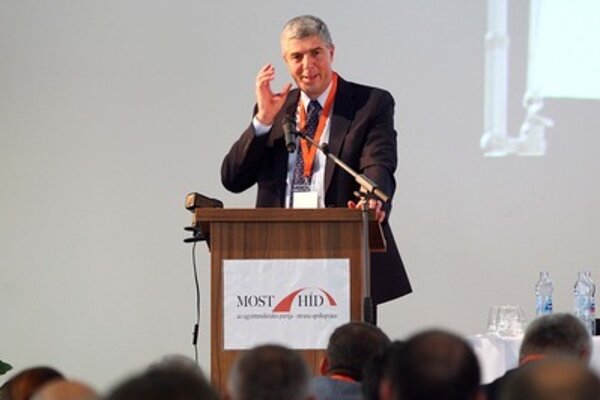 Most-Hid is not considering joining a coalition with Robert Fico Smer.

“We see an alternative to a single-coloured Smer government in a combination of the Most-Híd, KDH and Sieť parties as they are close to each other when it comes to their programmes and criteria of values,” said Bugár as cited by the TASR newswire. “And these parties could create a stable government without Smer.”

Bugár stressed that no written commitment or pre-election coalition is in the frame.

“We are only asking these parties to state whether they are able to cooperate after the election and to create the basis of the next government,” said Bugár.

Bugár knows that poll results concerning these three parties show they cannot threaten Smer in an election as things stand, but he believes that a common aim and attitude among the trio may encourage voters, meaning that this alternative could bring a better election result.

He believes that people need a sign that an alternative of these three can work and can replace a one-party government.

“We cannot rule out a possible change,” Most-Híd vice-chair Lucia Žitňanská said. “I am also turning to our colleagues so that we can give specific form to our alternative.”

KDH responded that it can imagine creating the basis of the next government with Most-Híd and Sieť.

“KDH can imagine such a basis for a new government ... These are parties that are close in terms of values, and I think that in the times to come they would be able to create an alternative to the socialists that are governing at the moment and to the corruption that is spreading in Slovakia,” said KDH caucus chairman Pavol Abrhan.

Head of Sieť Radoslav Procházka wouldn’t say on November 2 whether he is seeking to join forces with KDH and Most-Híd to act as an alternative to the Smer party.

“It was Béla Bugár who voiced concern in the media as to what things are like in my backyard,” said Procházka. “As now is the right time to prepare the garden for the winter, let’s combine the pleasant and the useful - I’ll invite him to my winter pruning, and on the side we’ll also discuss political issues ... I’ll pay him back by visiting his backyard later,” said Procházka.

Procházka reiterated that Sieť was founded with the aim of contributing to a change of generations in public service and to actual changes to the benefit of the middle class. The party strives to do its utmost so that these goals will come to fruition, he added.

“If the public with a different idea of running the state than the incumbent government is supposed to believe in the contingency of creating a stable and cohesive formation that expends all of its energy on serving the people, there’s a need to make sure that all possible components of such a formation are capable of at least the minimum restraint in displays of hostility towards potential partners,” said Procházka.