A GROUPING of three opposition parties could provide an alternative to Smer, which otherwise looks set to repeat its success from four years ago in the upcoming March elections, say leaders of the Most-Híd party. 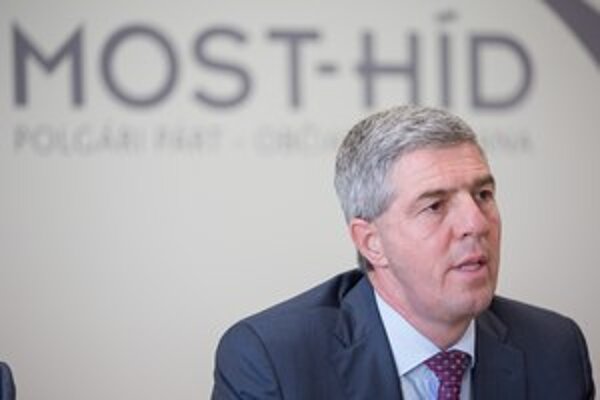 They believe such an alternative could work if only Christian Democratic Movement (KDH) and the non-parliamentary Sieť joined them in their initiative. Their bond should remain lose – no pre-election coalition or joint slate is on the table -- a promise to cooperate after the elections could suffice, according to Most-Híd leader Béla Bugár.

“If these parties sent out a signal that they want to cooperate after the elections, this alternative would gradually grow stronger and could defeat Smer in the elections,” said Bugár, who initiated meetings with the leaders of the other two parties, as he reported to the press on November 3.

KDH has been positive about the cooperation immediately, while Sieť remained cautious in its statements. Its leader Radoslav Procházka stressed that his party was founded “with the aim of contributing to an exchange of generations in public service and to actual changes to the benefit of the middle class”.

Later on however all three leaders agreed to meet, first bilaterally, Bugár reported on November 4.

By proposing cooperation Most-Híd asks its potential partners to agree on a joint approach for the elections. At the same time, however, KDH and Sieť are also its competitors and by proposing cooperation Most-Híd is facing them with an unpleasant situation. Whether they agree to cooperate or not, it might cost them some votes, according to Marek Rybář from the Comenius University’s school of political science.

Sieť, for instance, has been building an image of a new party, not burdened by the past, a sort of third force which is an alternative to both Smer and the long standing opposition parties. Meanwhile, however, Béla Bugar has been in politics for some 25 years now and is the textbook example of an old opposition politician, Rybář noted.

“If Sieť leaned to this old politics, they would disturb this image they have,” Rybář told The Slovak Spectator.

Two of the three potential partners have been part of a similar threesome before. After the fall of the government of Iveta Radičová and the subsequent 2012 elections that elevated Smer to power, three parties of Radičová’s coalition fell out with Freedom and Solidarity (SaS), whom they blamed for causing the fall of their government only one and a half years into their term. KDH, Most-Híd, and their then-partner Slovak Democratic and Christian Union (SDKÚ) -- unlikely to reach parliament next year -- formed a grouping and named it the People’s Platform. Their not-very-fruitful cooperation lasted about a year and a series of conflicts and the debacle of their joint presidential candidate Pavol Hrušovský led to the dissolution of the platform in the spring of 2014.

SaS, which was left on its own when the Platform was formed, now says no opposition party should be excluded if the intended alternative to Smer should be sound.

"If the mobilisation of rightist voters is to be serious, policies of exclusion don't have any place here," emphasised SaS chairman Richard Sulík as quoted by the TASR newswire.

Sulík also threw a suspicion on Sieť and KDH in his reaction, labelling them the most likely parties to create a coalition with Smer after the elections.

SaS has also recently offered cooperation to the other right-leaning parties. It proposed signing a Declaration of Responsibility for Slovakia, which asks right wing parties to commit themselves to not to cooperate with Smer. Most-Hid, Sieť and KDH don't plan to sign the declaration. On the other hand, Ordinary People-NOVA coalition and the Civic Conservative Party (OKS) did join the call.

No time for coalitions

Despite talk about the need for unity and cooperation among the fragmented centre-right, the tendency has been to the contrary. During the current election term, a number of regroupings took place among politicians of the opposition, and even the biggest parties have experienced splits and departures of their top members. This happened with KDH whose Daniel Lipšic now heads the NOVA movement and Radoslav Procházka heads Sieť, and it also happened with to the SaS and the SDKÚ.

The only recent example of a cooperation project is the coalition of OĽaNO and NOVA movements.

NOVA of Daniel Lipšic, and OĽaNO of Igor Matovič got together in late June. At the start of their cooperation they requested a poll in the Focus polling agency which returned support for their joint project at 11.1 percent.

“That is just a potential and whether it will be fulfilled depends on what you do to attract those voters,” Martin Slosiarik of Focus told The Slovak Spectator. In the polls over the summer the preferences were gradually decreasing and at this point their coalition polls around 7 percent, which is the threshold for entering the parliament. Slosiarik labelled this “a very risky situation”.

The parties can decide whether they will take the risk and wait to attract more voters as elections approach, or run as a single political subject, with Lipšic featured on the slate of OĽaNO with some other politicians, or break up completely, Slosiarik outlined the possible choices.

Observers do not see enough time for big cooperation projects at this point before the elections. There are “too many individuals” who “need to play the first violin”, according to Pavel Haulík of the MVK polling agency.

For Most-Híd, KDH, and Sieť, much will depend on what kind of cooperation they come up with. Rybář does not expect a pre-election coalition or a joint slate. The parties might agree to declare that their first choice would be a government of these three parties rather than joining Smer in a coalition, he said.

“This has some potential, because that way they make it clear what they will do after the elections,” Rybář said. The current situation is very unclear and discourages some voters, and more clarity could encourage some undecided voters, he noted.

Undecided voters and last-minute voters currently represent a large group among the electorate, pollsters agree. These voters represent a chance for the opposition, whom they tend to favour if they eventually decide to vote.

“Part of the voters will definitely decide to vote on the principle of the lesser evil,” Slosiarik said. “It won’t be a positive choice; they will rather look for a party that is least problematic, that they can identify with to some extent.”